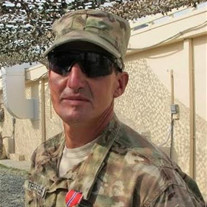 SSG Tracy Emmette Tressler, son of Timothy Emmette Tressler and Kathy Marie (Hiveley) Tressler Sewejkis, was born January 16, 1966 in Wayne, Michigan where he grew up and graduated from high school. Shortly after graduating from high school, Tracy enlisted in the United States Army. He served his country faithfully and was stationed in several different places; Germany, Kansas, Hawaii, Colorado, Michigan, North Carolina and Missouri. While serving in Germany, Tracy met Tania Dawn Wakefield and they were united in marriage on September 12, 1986 in Sonderborg, Denmark. They shared over 28 years of marriage together. Tracy’s responsibilities with the military while being stationed here at Fort Leonard Wood, was with the 88 Motor Transfer Opt as an instructor and writer. He took his job very serious and made sure that it was done to the best of his ability. Tracy’s favorite thing to do during his spare time was riding his Harley Davidson. He enjoyed being outdoors and enjoying nature while riding. Most importantly, he loved spending time with his family and friends. Tracy passed away Sunday, November 16, 2014 in his home having attained the age of 48 years and 10 months. He will be sadly missed by all those that knew and loved him. Tracy leaves to cherish his memory, his wife: Tania Tressler of St. Robert, MO; two children: Corey Tressler of the state of Colorado and Keyana Tressler of the state of Texas; two grandchildren: Kyle and Karson; his mother: Kathy Sewejkis of Romulus, MI; one sister: Teri Jenkins of Romulus, MI; father-in-law: Sam Wakefield of England; brother-in-law: Glynn Wakefield of England; two sisters-in-law: Mandy Frazier of the state of North Carolina and Melanie Lil of England; several nieces, nephews, other relatives and friends. Tracy was preceded in death by his father, Timothy Emmette Tressler. Funeral services with military honors were held at 6:30 p.m. Thursday, November 20, 2014 in the Memorial Chapels and Crematory of Waynesville / St. Robert with Chaplain Brian Minietta officiating. The songs “Drink A Beer” by Luke Bryan and “I Drive Your Truck” by Lee Brice were played. Tracy’s sister-in-law, Mandy Frazier recalled her wonderful memories of Tracy along with expressing the memories of other family members as well. Military honors were provided by the United States Army of Fort Leonard Wood, Missouri.

The family of SSG Tracy Emmette Tressler created this Life Tributes page to make it easy to share your memories.