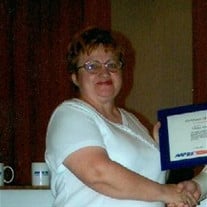 Ulrike Martin, daughter of Julius and Kresentia Rudinger, was born June 10, 1947 in Nurnberg, Germany where she grew up and attended school. Ulrike had a special hobby – trains. Her older sister Ingeborg worked in a toy train factory in Nurnberg, which was considered the toy center of the world and this is where Ulrike’s fascination with trains came about. In the late 1960s, Ulrike came to the United States and stayed here and worked. She eventually settled in the Fort Leonard Wood area and worked for several years at the commissary on post in retail. She loved visiting with the customers and her fellow employees. Ulrike had a special love for cats. She loved taking care of her many cats and when her health started to decline it grieved her that she could not take care of them like she used to. In her spare time, Ulrike liked to do different crafts and sharing them with neighbors and friends. Ulrike passed away Tuesday, May 27, 2014, in the Mercy Hospital of Springfield, Missouri after a brave fight with cancer. She had attained the age of 66 years, 11 months and 17 days. She will be sadly missed by all those that knew and loved her. She leaves to cherish her memory, four nieces: Susan Maniece and family of Las Vegas, NV; Joyce Jones and family of Atlanta, GA; Cathleen Bailey and family of Aurora, CO; and Janette Patterson and family of Bolingbrook, IL; Cousin: Helmi and Don Morse of Sevierville, TN and their children MaryAnn Alverez and family of South Padre Island, TX, Kimberly Morse and family of Sevierville, TN and Richard Morse and family of Flint, MI. She is also survived by her [sister-in-law] Brigetta Rudinger and [niece] Sandra Rudinger of Nurnburg, Germany, as well as other cousins in Germany and New York and many dear friends. Graveside services were held at 12:00 p.m. Monday, June 2, 2014 in the Sunset Memorial Estates Cemetery of Waynesville with Rev. Christopher Hendrix officiating. Serving as escorts were family and friends. Services were under the direction of Memorial Chapels and Crematory of Waynesville / St. Robert. Memorial contributions may be made in memory of Ulrike Martin to the Lebanon Humane Society and may be left at the funeral home.

Ulrike Martin, daughter of Julius and Kresentia Rudinger, was born June 10, 1947 in Nurnberg, Germany where she grew up and attended school. Ulrike had a special hobby &#8211; trains. Her older sister Ingeborg worked in a toy train factory... View Obituary & Service Information

The family of Ulrike Martin created this Life Tributes page to make it easy to share your memories.

Ulrike Martin, daughter of Julius and Kresentia Rudinger, was...