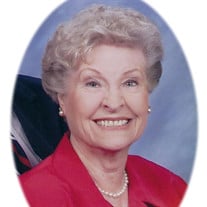 Velma Lois Hensley, daughter of the late Lloyd and Elizabeth (Duncan) Bell, was born May 11, 1931 in Yukon, Oklahoma. As a young girl, Velma grew up on a cattle farm in Licking, Missouri where she graduated from high school with the Class of 1949. On August 10, 1951, Velma was united in marriage to Raymond Crider. They shared over 35 years of marriage together before he preceded her in death in October 1986. On October 30, 1993, Velma was united in marriage to Lawrence O. Hensley in Jefferson City, Missouri. They shared over 18 wonderful years together before he preceded her in death on January 16, 2012. Velma lived in Jefferson City, Missouri most of her working years and worked for Central Bank for 32 years before retiring in 1992. At the time of her retirement, she was a loan officer. She loved meeting and working with the people that came in the bank. After her retirement, Velma and Lawrence moved to the Waynesville area and became very involved with Westside Baptist Church. Velma enjoyed doing different things at the church, such as singing in the choir and she loved going on the BASIC trips with the senior saints of the church, especially after Lawrence passed away. Velma and Lawrence loved to travel and would make numerous trips to Branson to watch the shows. They also enjoyed going to Waynesville football, basketball and baseball games. Velma was also quite the collector and enjoyed collecting blue glass and Thomas Kinkaid paintings. Velma went home to be with her Lord Friday, May 17, 2019 in the Phelps Health Hospital of Rolla, Missouri having attained the age of 88 years. She will be sadly missed, but fondly remembered by all those who knew and loved her. Velma leaves to cherish her memory, one grandchild: Jennifer Gomez (Ronald) of St. Louis, MO; daughter-in-law: Rosemary Hensley of Rock Hill, MO; sisters-in-law: Marlene Hartley of Richland, MO, Jennette Hensley of Orrick MO, and Barbara Johnson of Albuquerque, NM; brothers-in-law: Dwight Hensley (Marilyn) of Waynesville, MO and Dennis Hensley of Columbia, MO; several nieces, nephews, other relatives and friends. In addition to her parents and husbands, Velma was preceded in death by stepson: Larry Hensley; and three siblings: Robert Payne, James Mathews and Virginia Williams. Funeral services were held at 11:00 a.m. Thursday, May 23, 2019 in the Westside Baptist Church of Waynesville with Rev. Lindell Shelden officiating and David Hartley recalled his wonderful memories of Velma. Mike Freeman sang "In the Garden" and "He Lives" and Becky Lercher sang "Celebrate Me Home". Serving as escorts were David Hartley, Mike Hartley, Robert Hartley, Mark Mosiron, Joe Petrich and Casey Malley. Burial followed in the Waynesville Memorial Park Cemetery. Services were under the direction of Memorial Chapels and Crematory of Waynesville / St. Robert. Memorial contributions may be made in memory of Velma Hensley to the Westside Christian Academy and may be left at Memorial Chapels and Crematory of Waynesville / St. Robert.

Velma Lois Hensley, daughter of the late Lloyd and Elizabeth (Duncan) Bell, was born May 11, 1931 in Yukon, Oklahoma. As a young girl, Velma grew up on a cattle farm in Licking, Missouri where she graduated from high school with the Class... View Obituary & Service Information

The family of Velma Lois Hensley created this Life Tributes page to make it easy to share your memories.

Velma Lois Hensley, daughter of the late Lloyd and Elizabeth...