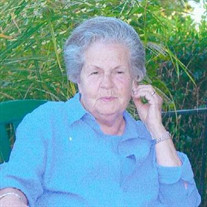 Maxine Vera (Crews) Mayor Burns was born December 22, 1925 in Madison County, Illinois to William Alfred and Minnie Mae (Hamilton) Crews. She attended grade and high school in Wood River, Illinois. Maxine was baptized and a charter member of Parkview Baptist Church (now 1st Baptist Church in St. Robert). Maxine has lived in the area for over 60 years. She was a wife, mother, grandmother, great grandmother and great-great grandmother. She worked for Dr. Bennie Thomas for a number of years, and also worked for the school lunch program. She was married to Louis H. Mayor, they were later divorced. In 1972 she married John David Burns. Maxine passed away Wednesday, March 7, 2018 in the Life Care Center of Waynesville having attained the age of 92 years. She will be sadly missed, but fondly remembered by all those that knew and loved her. Maxine leaves to cherish her memory, two daughters: Joan Kay Audlee (Gerry) of Micco, Florida and Brenda Kloepper (Don) of Effingham, Kansas; two sons: Gary Mayor of Waynesville, MO and Larry Mayor of the home; one stepson: Mike Burns; several grandchildren, great grandchildren and great-great grandchildren; nieces, nephews, other relatives and friends. She is preceded in death by her parents, and husbands; one son, Butch Mayor; three sisters: Ruth Driesbach, Velma Hutte, and Norma Dean; and one brother: Billy V. Crews. Graveside services were held at 2:00 p.m.Sunday, March 11, 2018 in the Dunkard Cemetery of St. Robert, Missouri with Pastor Danny Graves officiating. Serving as escorts were family and friends. Services were under the direction of Memorial Chapels and Crematory of Waynesville / St. Robert. In lieu of flowers, the family requests memorial contributions be made in memory of Maxine Burns to the Pulaski County Animal Shelter and may be left at the funeral home.

The family of Vera Maxine (Crews) Mayor Burns created this Life Tributes page to make it easy to share your memories.