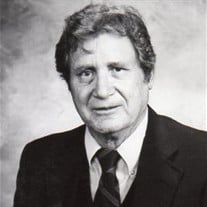 World War II Veteran and son of the late Baker Elwood Sr. and Mary Opal (Henson) Wilson, was born on his family’s farm near Richland, Missouri September 28, 1925. At age 14 Vernon left his family and home to work in Chicago for the railroad. In 1943, Vernon entered the US Navy serving in WWII in the South Pacific at Okinawa serving on the USS LST 12 and the USS LST 42 before his discharge in 1946. However, Vernon re-enlisted, but this time in in the US Army Air Corps from 1946 to 1949 before he was honorably discharged. Vernon was truly proud and honored to serve his country and was awarded the Parachute Badge, Expert 30 Cal Rifle M-1, and the World War II Victory Medal. During some R&R, Vernon was about to enjoy a ride on a bumper car when a spunky young east coast girl named Thelma Flossom Taylor, had that same thought. As the story goes…they both jumped in and rode it together! The happy couple married in Phoenix City, Alabama on October 15, 1947, and were later blessed with daughter, Teresa. Vernon used the same bold adventurous spirit he had leaving home at such a tender age, to later leaving his civil service position and headed out on the road as a salesman. Vernon slept in his car with barely enough money for gas; he traveled his territory making friends with every boat dealer he met. Later, after several decades of being named top salesman for first, Appleby Boats and then Bonanza Boats until his retirement. Over the years Vernon owned many local businesses including a Drive in Theater and an ice cream parlor. He enjoyed collecting cars, coins and guns. He liked to imagine himself a farmer often buying tractors while wearing a straw hat. He owned three airplanes in his lifetime. Two small Cessna’s that he road in as a passenger…only piloting a “few minutes” at the urging of his nervously, anxious family, friends and the actual pilot! His third was a large commercial plane that he and friend, Sonny Hooker had dreams of someday turning into a restaurant. Vernon was also known for his annual 4th of July parties spent watching the fireworks over Lake of the Ozarks from one of his beloved Cabin Cruisers. Up until the end of Vernon’s life, he continued working on his inventions, telling stories and looking for the perfect RV to go camping in. No matter what his age he remained perpetually young and never stopped learning, laughing, or planning his next great adventure. Vernon peacefully passed away the morning of Friday, May 31, 2019 in Lebanon, Missouri having attained the age of 93 years. He is preceded in death by his parents, his wife, Thelma, four brothers, Leman, Baker Jr., Doyle and Don Wilson, three sisters, Violet Oursbourn, Bonnie Starnes and Sue Paul. Vernon is survived by his daughter Teresa “Terri” McDaniel and her husband, Dannie of Richland, Missouri, one granddaughter, Sarah Christine Carroll of Richland, Missouri, 3 great-grand sons: Mason Carroll, Garon Carroll and Jesse Jennings; 5 great-great grandchildren: Erin, Marshall, Maddox, Walker and Molly; one brother, Dean Wilson and his wife, Peggy of Richland, MO; sister-in-law’s: Rose Wilson of the state of IL and Doris Wilson of the state of KS; several nieces, nephews, and other relatives and friends. Vernon had a big heart and was willing to help his family whenever he could. There’s always going to be special memories to share with future generations because of the legacy Vernon has left behind. Although he will be missed…he will never be forgotten! Services were held at 11:00 a.m., June 6, 2019 in the Missouri Veterans Cemetery of Waynesville, Missouri with Pastor Danny Graves officiating. Military honors were provided by Missouri Honors. Vernon and Thelma were reunited and interred together. Services were under the direction of Memorial Chapel of Richland. Memorial contributions may be made in memory of Vernon Wilson to the American Legion Post 240 of Richland, Missouri and may be left at the Memorial Chapel of Richland. Online condolences may be left at www.richlandmemorialchapel.com

World War II Veteran and son of the late Baker Elwood Sr. and Mary Opal (Henson) Wilson, was born on his family&#8217;s farm near Richland, Missouri September 28, 1925. At age 14 Vernon left his family and home to work in Chicago for the railroad.... View Obituary & Service Information

World War II Veteran and son of the late Baker Elwood Sr. and...