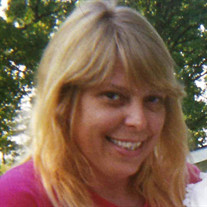 Vicki Lynn Goad Smith daughter of Harry Ray and Joyce Ruth Johnson Goad was born October 25, 1959 in St. Louis, Missouri and departed this life on Wednesday, December 31, 2014 in the Lake Regional Medical Center, Osage Beach, Missouri at the age of 55. Vicki lived in Jefferson County, Missouri until 1976, she then moved in the Richland area. Vicki completed her education obtaining her GED. Vicki was married Jim Smith and they were blessed with two precious children, Kevin and Keri to which she was very proud of. Earlier in life Vicki worked at Head Start and Day Care in Richland. She loved children and volunteered as an Assistant Coach. Vicki also helped out at school with events her children were involved in. Vicki’s life wasn’t an easy one as she suffered with several health issues that kept her from working outside the home. However, she never let them get her down. She loved animals, especially her little dog Lucy. Vicki also enjoyed baseball and was a loyal fan of the St. Louis Cardinals. Vicki would occasionally play games on her computer however, she loved watching her favorite TV show, the Big Bang Theory. If you ever saw Vicki out and about, she was always quick to share what was going on in the lives of her kids. She was a loving, devoted mother and greatly enjoyed spending time with her family and friends. Vicki also found joy spending time with her companion Ricky McMahon, the two were nearly inseparable. Vicki was preceded in death by her father, Harry Ray Goad on May 12, 2013 and her brother, Kevin Todd Goad on Aug. 26, 2010. Vicki was dearly loved and will be greatly missed by her two children: Kevin Smith and his wife, Claudia, of Shawnee, KS, and Keri Smith of Columbia, MO; her mother, Joyce Goad of Richland, MO; three brothers: Kenny Goad and Mike Goad both of Richland, MO and Mitchell Goad of Affton, MO; her boyfriend, Rick McMahon of Richland, MO; a number of nieces, nephews, other relatives and friends Vicki was a loving mother, daughter, sister, aunt and friend who gave, in life, far more than she received. We will remember and miss her beautiful smile and laughter. Today, however, we celebrate her life and treasure the many wonderful memories she created with all those who knew and loved her. Services were held at 1:00 p.m., Monday, January 5, 2015 in the Memorial Chapel of Richland with Rev. Lee Todd officiating. Special music recordings included “Amazing Grace” and “How Great Thou Art.” Escorts were Family and Friends. Burial was in the Concord Cemetery near Crocker, Missouri. Services were under the direction of Memorial Chapel of Richland. Memorial contributions may be made in memory of Vicki Smith and may be left at the Memorial Chapel of Richland.

The family of Vicki Lynn Goad Smith created this Life Tributes page to make it easy to share your memories.