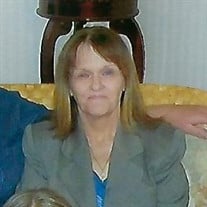 Vicki Jean Hollaway, daughter of the late John and Carmen (Hicks) Marsala, was born November 7, 1950 in Salinas, California. She passed away Wednesday, January 1, 2020 in the Lebanon North Nursing and Rehab Center of Lebanon, Missouri having attained the age of 69 years. Vicki grew up In Salinas, California and graduated from Alsisal High School. On November 27, 1973 in Yuma, California, Vicki was united in marriage to William R. Hollaway, Sr. and they shared three children: Jeana L., Billie Jean, and William R., Jr. From 1981 to 1986, Vicki worked for the Auto Craft Shop on Fort Ord, California as a cashier and clerk. Vicki’s main passion was her family. She loved them dearly and enjoyed spending time with them. According to her family, she was a phenomenal cook and homemaker, who made her home a haven for her family. She especially enjoyed being a grandmother and looked for every opportunity to spend time with her grandkids. Vicki was also a very good and loyal friend. She was always interested in people and their lives and was a such of encouragement to her family and friends. Vicki also loved all kinds of music and books. Vicki will be sadly missed, but fondly remembered by all those who knew and loved her. She leaves to cherish her memory, her husband: William Hollaway, Sr. of the home; three children: Jeana Ray of Richland, MO, Billie Jean Hollaway-Brown (Gerald) of Richland, MO and William Hollaway, Jr. of Richland, MO; four grandchildren; one brother: John Marsala (Clare) of the State of Idaho; two sisters: Janet Tucker Nefzger (David) of the State of Idaho and Carla Sullivan (Jim) of Sun Prairie, WI; several nieces, nephews, other relatives and friends. In addition to her parents, Vicki was preceded in death by one brother: Robert Marsala; and her best friend: Michelle Conti, whom she considered a sister. Even though she is gone from our sight, she will live on in our hearts forever. Services were held at 11:00 a.m. Thursday, January 9, 2020 in the Memorial Chapel of Richland with Pastor Richard Harris officiating. The songs “He Stopped Loving Her Today” by George Jones and “Little Girl Blue” by Janis Joplin were played. Serving as escorts were family and friends. Burial followed in the Missouri Veterans Cemetery of Waynesville. Services were under the direction of Memorial Chapel of Richland. Memorial contributions may be made in memory of Vicki Hollaway and may be left at Memorial Chapel of Richland.

Vicki Jean Hollaway, daughter of the late John and Carmen (Hicks) Marsala, was born November 7, 1950 in Salinas, California. She passed away Wednesday, January 1, 2020 in the Lebanon North Nursing and Rehab Center of Lebanon, Missouri having... View Obituary & Service Information

The family of Vicki Jean Hollaway created this Life Tributes page to make it easy to share your memories.