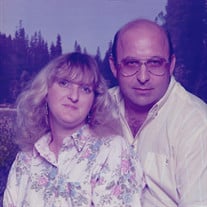 Vickie Lee Kohler, daughter of the late Eugene Marshall and Regina “Jeanie” Sheila (Mayfield) Rickerson, was born June 21, 1955 in Waynesville, Missouri where she grew up and attended school. On January 13, 1987, Vickie was united in marriage to John George Kohler II in Waynesville, Missouri. They shared over 32 years and two children, Tonya Ann and John George Kohler III. Vickie was a very patient and giving person. She felt her calling was to work with handicapped children and she worked at Kids Are Us and the Pulaski County Group Home where she was a housemother to the children. In her spare time, Vickie enjoyed being outdoors while fishing and camping with her family. She was a member of the VFW Auxiliary #4956. Most importantly, she loved spending time with her family and friends. Vickie passed away Thursday, December 12, 2019 in the University of Missouri Hospital of Columbia, Missouri having attained the age of 64 years. She will be sadly missed, but fondly remembered by all those who knew and loved her. She leaves to cherish her memory, her loving husband: John Kohler of Crocker, MO; one daughter: Tonya Ann Hains (Bill) of Cincinnati, OH; one son: John George Kohler III of the state of Wisconsin; three sisters: Vera Mottiset (Raymond) of the state of Missouri, Sheila Ann Hell (Ryan) of the state of Georgia and Brenda Rickerson of Crocker, MO; five grandchildren: Erica, Nathan, Marybella, Roberto and Estela; several nieces, nephews, other relatives and friends. In addition to her parents, Vickie was preceded in death by three brothers: James, Charlie and George Rickerson and one sister: Penelope “Penny” McCartney. Memorial services were held at 10:45 a.m. Friday, December 20, 2019 in the Seaton Chapel of Dixon, Missouri with Pastor Helen Winters officiating. Arrangements were under the direction of Memorial Chapels and Crematory of Waynesville / St. Robert. Memorial contributions may be made in memory of Vickie Kohler and may be left at Memorial Chapels and Crematory of Waynesville / St. Robert.

Vickie Lee Kohler, daughter of the late Eugene Marshall and Regina &#8220;Jeanie&#8221; Sheila (Mayfield) Rickerson, was born June 21, 1955 in Waynesville, Missouri where she grew up and attended school. On January 13, 1987, Vickie was... View Obituary & Service Information

The family of Vickie Lee Kohler created this Life Tributes page to make it easy to share your memories.