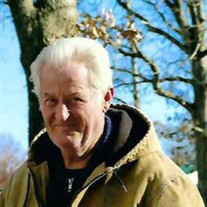 Victor Lee Henson, one of twelve children born to Jesse and Vivian Rachel (Crossland) Henson, was born July 16, 1951, in Pulaski County, Missouri, and left this world behind to spend eternity with his Lord and Savior, Monday, August 9, 2021, surrounded by his loving family, having attained the age of 70 years, and 24 days. He grew up and attended school in Richland, where he lived his entire life, never venturing far from the place he loved, and called home. Victor made a profession of faith in Christ and followed in baptism at Grace Baptist Church in Richland, where he had been a member since 1964. Victor’s ministry was silently shown in and out of his community and for the people he loved in it. It was there that his little light shined for God. He began his maintenance-groundskeeping career with the City of Richland on June 29, 1977, retiring in 2018. When he wasn’t working, Victor enjoyed visiting with his friends and neighbors at the MFA, and at the Nursing Home. He also loved to raising chickens and giving away their eggs, he also enjoyed driving out to the farm just to go fox and rabbit hunting. He was humble, and kind…unless you tried to rile him up. Victor loved people, especially kids. He had a giving heart, and was mindful of the needs of others, always willing to help out whatever the need. He just enjoyed the simple things in life and loved sitting on his front porch, waving to whoever passed by. Victor was preceded in death by his parents, Jesse, and Vivian Henson, one sister, Carolyn Rose Crossland, two brothers, Jesse Spiro and William C. Henson. He leaves behind to cherish his memory two brothers, Tommy Henson (Carol), Gary Henson (Lucy), all of Richland; six sisters, Linda Jefferies (Larry), Beverly Elson (Harold), Jessica Warren (Bill), Azalee Henson, and Alice Duncan (Mitch), all of Richland and Martha Burke (Paul Agan) of Lebanon, several nieces, nephews, and a host of other relatives, and friends. Victor was loyal to his family and friends and looked forward to the times they could gather together reminiscing about the good ole days. His presence in his small hometown will be greatly missed. A graveside service was held at 2:00 p.m., Thursday, August 12, 2021, in the Oaklawn Cemetery of Richland, with Pastor Harold Elson officiating. Escorts included Victor’s nephews and friends. Memorial contributions may be made in memory of Victor Lee Henson to Richland’s, Blessings in a Backpack Program and may be left at the funeral home. Services were under the care and direction of Memorial Chapel of Richland. Online condolences may be sent to www.memorialchapelsandcrematory.com

Victor Lee Henson, one of twelve children born to Jesse and Vivian Rachel (Crossland) Henson, was born July 16, 1951, in Pulaski County, Missouri, and left this world behind to spend eternity with his Lord and Savior, Monday, August 9, 2021,... View Obituary & Service Information

The family of Victor Lee Henson created this Life Tributes page to make it easy to share your memories.

Victor Lee Henson, one of twelve children born to Jesse and Vivian...