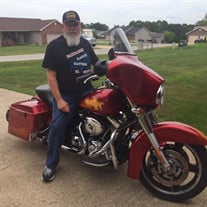 Virgil Thomas Maddox, son of the late Marion Lee Maddox and Hazel Elizabeth (Jackson) Maddox, was born January 3, 1956. He passed away Thursday, August 6, 2020 due to injuries sustained in a motorcycle accident having attained the age of 64 years. As a young boy, Virgil grew up in Mobile, Alabama where he attended school. At the age of 17, Virgil entered the United States Army and served his country faithfully until his retirement in 1993 in Fort Wainwright, Alaska. During his military career, Virgil was earned several awards and commendations; some of which include: Army Service Ribbon-1, Overseas Service Ribbon-2, National Defense Service Medal-2, Army Commendation Medal-2, Army Good Conduct Medal (6th Award), Non-commissioned Officers Professional Development Ribbon-3, and the National Defense Service Medal-2. He had attained the rank of Staff Sergeant. After his retirement from the military, Virgil continued to serve his country as a civil serviceman. He served as a firefighter and retired after several years of faithful service in Fort Wainwright, Alaska. While in Alaska, Virgil met a young lady by the name of Kum Sun Kang and they were married on July 25, 2002. They eventually moved to the Waynesville, Missouri area and enjoyed living in the Ozarks. In his spare time, Virgil enjoyed woodworking, especially building things. He also liked to watch old movies and being outdoors while riding his motorcycle. Most importantly, he loved spending time with his family and friends. Virgil will be sadly missed, but fondly remembered by all those that knew and loved him. He leaves to cherish his memory, his wife: Kum Sun Maddox of the home; three children: Marion Maddox of Fairbanks, AK, David Reynolds (Faith) of Campbellsville, KY and Kevin Reynolds of Campbellsville, KY; nine grandchildren; two great grandchildren: one brother: Gordon White (Debbie) of Semmes, AL; sister-in-law: Kum Suk Schmadel (Frank) of Waynesville, MO; several nieces, nephews, other relatives and friends. In addition to his parents, Virgil was preceded in death by one brother, Steve. Services were held at 1:00 p.m. Monday, August 10, 2020 in the Memorial Chapels and Crematory of Waynesville with Pastor Sung H. Park officiating. The songs “Amazing Grace” by Alan Jackson, “Jealous of the Angels” by Donna Taggart and “My Old Man” by Zac Brown Band were played. Serving as escorts were family and friends. Burial with military honors followed in the Missouri Veterans Cemetery with Chaplain (CPT) Phillip D. Redden officiating. Military honors were provided by the Missouri Honors Team.

Virgil Thomas Maddox, son of the late Marion Lee Maddox and Hazel Elizabeth (Jackson) Maddox, was born January 3, 1956. He passed away Thursday, August 6, 2020 due to injuries sustained in a motorcycle accident having attained the age of 64... View Obituary & Service Information

The family of SSG (Ret) Virgil Thomas Maddox created this Life Tributes page to make it easy to share your memories.