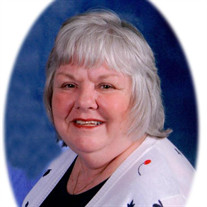 Virginia Ann Duvernell, daughter of Elmer and Mildred (Kiefer) Klingemann, was born December 22, 1948 in Afton, Missouri where she grew up and graduated from Afton High School. On April 19, 1968, Jenny, as she was known to her family and friends, was united in marriage to Douglas Charles Duvernell in St. Louis, Missouri. They shared over 47 years of marriage together and were blessed with two children: David and Cheri. Jenny was a computer programmer for Bank of America for over 30 years. But her main priority was her family and she loved caring for and providing for them. Jenny and Doug spent the majority of their lives in the St. Louis area until their retirement. They moved to Laquey, Missouri in 2001 to a farm on the Gasconade River that they purchased many years earlier. In their retirement they enjoyed the quiet life together in a pastoral setting, away from the bustle of the city. In her spare time, Jenny loved to work with crafts, especially cross stitch, and enjoyed giving different things she had made to her family and friends. Most importantly, she loved spending time with her family and taking trips with her friends. After moving to the Laquey, Missouri area, Jenny began attending the Faith Lutheran Evangelical Church in St. Robert and was very active in the church. She made many new and special friends in her new community, and she enjoyed helping the church and congregation any way that she could. Jenny went home to be with her Lord Monday, December 28, 2015, at her home in Laquey, Missouri having attained the age of 67 years. She will be sadly missed, but fondly remembered by all those who knew and loved her. Jenny leaves to cherish her memory, her husband, Douglas of the home; her two children, David Duvernell (Christine) of Edwardsville, IL and Cheri Stoops (Roger) of Republic, MO; a granddaughter, Brooklyn Stoops of Republic, MO; her father, Elmer Klingemann of St. Louis, MO; her sister, Betty Herchel (Claude) of Hillsboro, MO; nieces and nephews; as well as a host of other relatives and friends. Services were held at 10:00 a.m. Saturday, January 2, 2016 in the Faith Lutheran Evangelical Church of St. Robert, Missouri with Pastor John Perling officiating. Serving as escorts were family and friends. Burial followed in the Waynesville Memorial Park Cemetery of Waynesville. A memorial has been established to the American Cancer Society, in Mrs. Duvernell’s name and contributions may be left at the funeral home.

Virginia Ann Duvernell, daughter of Elmer and Mildred (Kiefer) Klingemann, was born December 22, 1948 in Afton, Missouri where she grew up and graduated from Afton High School. On April 19, 1968, Jenny, as she was known to her family... View Obituary & Service Information

The family of Virginia Ann Duvernell created this Life Tributes page to make it easy to share your memories.