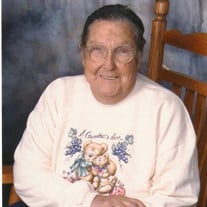 Virginia Ruth Powers, daughter of Benjamin Franklin and Ila May (Harris) Kissinger, was born March 22, 1925 in Hazelgreen, Missouri. She attended school in Richland, where she remained throughout her life. She was saved in 1937 and was baptized in the Gasconade River. Her father was a Baptist preacher however; Virginia was a member of the First Christian Church, Richland, Missouri. Virginia was united in marriage to Clifford Dale Powers on July 11, 1943, in Richland, Missouri, and to this union a son was born. Together they shared over 53 years together before Cliff’s passing in 1996. Virginia was devoted to her family. She found great joy and pride in raising her son, Larry Dale. Virginia led a busy life. Along with taking care of her home and family, Virginia also worked for the International Shoe Factory in Richland 13 years, then went on to work for Brown Shoe Company for the next 20 years in Dixon, before retiring in 1987. Virginia, sometimes affectionately called, “Gabby” because of her old CB handle, enjoyed visiting with people and made friends easy. She was feisty, and full of spunk. Her mischievous smile could light up any room, bringing laughter and love to those around her. Virginia having a servant’s heart enthusiastically volunteered at the Nutrition Center in Richland for several years. When her grandson, Nathanial played sports, Virginia became a member of “The Granny Squad” cheerleading for the Laquey Hornets. She was a life time member of the VFW; and was also a loyal friend to the Richland Police, Fire & Ambulance Departments, finding great joy in baking cakes, or pies for them to show her appreciation for their service. She was very proud of her awards and plaques that were presented to her over the years. In her younger days, Virginia loved dropping a line in her favorite fishing hole in hopes to catch “the big one”. Holiday times were always fun too for Virginia. On Halloween, she would decorate her home, put on a costume, and stand ready to pass out the candy! After Virginia went into the nursing home, she’d even pass out candy to those who crossed her path. Virginia especially liked Larry bringing her a Dr. Pepper. Virginia loved life, and making people happy. But above all, Virginia loved spending time with her family and friends. On the morning of Saturday, August, 12, 2017, while in the Christian Health Care South, Lebanon, Missouri, Virginia was escorted by angels to her Heavenly home having attained the age of 92 years. Virginia will be sadly missed, but fondly remembered by her loving son, Larry D. Powers (Linda) of Waynesville, MO; one brother: Benny Kissinger (Inis) of Crocker, MO; 5 grandchildren: Tammy Bone (Richie) of Ozark, MO, Brian Powers of Springfield, MO, Nathanial Powers (Jessica) of England, Heather and Amy Devore both of Lebanon, MO; 6 great grandchildren: Justin Dale Powers, Joshua Dale Bone, Jacob Nathaniel Powers, Caleb Trenton Powers, Scarlette Jean Powers and Kevin Matthew Devore; several nieces, nephews, other relatives and friends. In addition to her parents, and husband, Cliff, Virginia was preceded in death by one sister: Agnes Kramer. Services were held at 11:00 A.M., Wednesday, August 16, 2017 in the Memorial Chapel of Richland with Pastor Lee Todd officiating. Grandson, Brian Powers gave his grandmother’s eulogy. Soloist Becky Lercher sang, “I Won’t Have to Cross Jordan Alone” and “Beyond the Sunset.” Soloist Christopher Hendrix, Sr. sang, “Amazing Grace My Chains Are Gone.” Other favorite recordings included, “Peace in the Valley” and “Go Rest High on that Mountain.” Serving as escorts were Brian Powers, Nathanial Powers, Richie Bone, Johno Smith, Bucky Crossland and Johnny McGown. Honorary escorts were Virginia’s great-grandchildren, Justin Dale Powers, Joshua Dale Bone, Jacob Nathanial Powers, Caleb Trenton Powers, Scarlette Jean Powers and Kevin Matthew Devore. Burial followed in the Oaklawn Cemetery of Richland, Missouri. Memorial contributions may be made in memory of Virginia Powers to either the Richland Fire Department or to the Warren Senior Center or Richland and may be left at the funeral home. Online condolences can be sent at www.memorialchapelsandcrematory.com.

Virginia Ruth Powers, daughter of Benjamin Franklin and Ila May (Harris) Kissinger, was born March 22, 1925 in Hazelgreen, Missouri. She attended school in Richland, where she remained throughout her life. She was saved in 1937 and was baptized... View Obituary & Service Information

The family of Virginia Ruth Powers created this Life Tributes page to make it easy to share your memories.

Virginia Ruth Powers, daughter of Benjamin Franklin and Ila May...