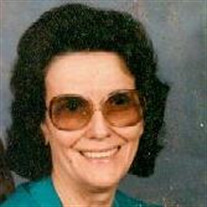 Virginia Myrl Robbins, daughter of the late Chester M. and Mary Alice (McBride) Fred, was born October 9, 1927 in Marmaduke, Arkansas, a rural town near Rector, Arkansas. She attended a small country school with her brother and sister and enjoyed country life raising chickens and flowers. On January 3, 1953, Virginia was united in marriage to Robert E. Robbins in Pigott, Arkansas. They shared many wonderful years of marriage together and were blessed with five children: Darlene, Eddie, Fred, Venetta, and Dennis. After moving to the Waynesville area, Virginia began working at Tri County Nursing Home, now known as Richland Care Center. She worked as a CNA for close to 20 years. She loved her job and taking care of the residents. In her spare time, you could find Virginia outside working in her massive flower garden which was known as the “best yard in the neighborhood”. She had a variety of flowers in bloom from early spring to late fall. When she couldn’t be outside working in her flower gardens, she enjoyed quilting and did so by hand using old family and friend patterns that she had obtained over the years. In 1953, Virginia made a profession of faith and asked Jesus into her heart. On Friday, October 6, 2017, Virginia went home to be with her Lord in her home surrounded by her loving family. She had attained the age of 89 years. She will be sadly missed, but fondly remembered by all those that knew and loved her. Virginia leaves to cherish her memory, her four children: Darlene McDonald, Eddie (Pat) Robbins, Fred (Bambi) Robbins and Venetta Robbins all of Waynesville, MO; six grandchildren: Eric (Kim) Robbins, Jeff Robbins, Mandy (Mark) Aros, Crystal (Ronnie) Miller, Tambi Robbins and Macayla Robbins; five great grandchildren and many wonderful friends. In addition to her parents, Virginia was preceded in death by her husband: Robert E. Robbins; infant son: Dennis Robbins; brother: Gale Fred; and sister: Martha Gower. Graveside services were held at 10:00 A.M. Saturday, October 7, 2017, in the Buckhorn Cemetery in Buckhorn, MO. Services were under the direction and care of Memorial Chapels and Crematory of Waynesville. Memorial contributions may be made in memory of Virginia Robbins and may be left at the Memorial Chapel and Crematory of Waynesville.

Virginia Myrl Robbins, daughter of the late Chester M. and Mary Alice (McBride) Fred, was born October 9, 1927 in Marmaduke, Arkansas, a rural town near Rector, Arkansas. She attended a small country school with her brother and sister and enjoyed... View Obituary & Service Information

The family of Virginia Robbins created this Life Tributes page to make it easy to share your memories.