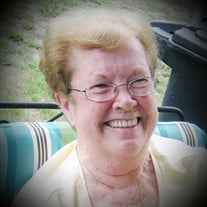 Virginia Ruth Vozniak, daughter of the late James Monroe and Myrtle Eliza (Holderman) Enloe, was born January 26, 1943 in Waynesville, Missouri where she grew up and attended school. As a young girl, she became a member of the Mt. Gibson Baptist Church of Waynesville. On March 9, 1960, Virginia married Herman Schriver and to this union two children were born: Carrie and Jim. On June 19, 1965, Virginia married Harold Brown and one daughter, Shirley, was born to this union. On August 9, 1978, George was united in marriage to Virginia Ruth Enloe in Las Vegas, Nevada. They shared over 38 years of marriage together and many wonderful memories before George preceded her in death on February 20, 2017. Virginia was a hardworking woman and took great pride in helping to provide for her family. She began working for Toombs & Sons (later known as EDP) where she started as a KP employed and worked her way up to 1st cook shift leader before retiring in 2005 after 32 years of service. In her spare time, Virginia enjoyed crocheting until her hands became crippled and enjoyed sharing her handiwork with family and friends. She also liked to work in her flowers, reading and doing puzzles and word searches. Most importantly, she loved her family and enjoyed getting to spend time with them. Virginia passed away Tuesday, June 20, 2017 in Phelps County Regional Medical Center of Rolla, Missouri having attained the age of 74 years. She will be sadly missed, but fondly remembered by all those that knew and loved her. Virginia leaves to cherish her memory, her daughter: Shirley (Dwight) McKinnon of Dixon, MO; two brothers: Kenneth (Nora) Enloe of Kansas City, MO and John Enloe of Fall River MA; three grandchildren: Andrea Ling, Cheyenne Alexander and Rachelle Thessen; seven great grandchildren; several other relatives and friends. In addition to her parents and husband, Virginia was preceded in death by one son: James Gardlord Schriver; four brothers: Robert, Paul, Claude and James Enloe; one sister: Frances Marie Adkison; and one daughter: Carrie Schriver. Services were held at 11:00 a.m. Friday, Jun 23, 2017 in the Memorial Chapels and Crematory of Waynesville / St. Robert with Pastor Danny Graves officiating. The songs “In the Garden”, “Amazing Grace” and “Beyond the Sunset” were played. Serving as escorts were her loving family. Burial followed in the Waynesville Memorial Park Cemetery of Waynesville. Memorial contributions may be made in memory of Virginia Ruth Vozniak to the American Cancer Society and may be left at the funeral home.

Virginia Ruth Vozniak, daughter of the late James Monroe and Myrtle Eliza (Holderman) Enloe, was born January 26, 1943 in Waynesville, Missouri where she grew up and attended school. As a young girl, she became a member of the Mt. Gibson Baptist... View Obituary & Service Information

The family of Virginia Ruth Vozniak created this Life Tributes page to make it easy to share your memories.

Virginia Ruth Vozniak, daughter of the late James Monroe and...