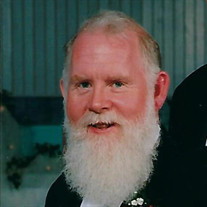 Volley Walter Willis, Jr., also known as Red by many friends, was one of three children born to the union of the late Volley W. Willis and Ruth Olivia (Miller) Willis, was born October 5, 1955 in Ironton, Missouri. Jr attended all 12 years of school at Plato School District, which is where he and Sandy first met. During high school, Jr played baseball in the position of catcher. Jr loved most sports and games and was very competitive. He always said “if you don’t play to win – don’t play!”. After high school, he continued to play sports, volleyball, slow pitch softball as a catcher and first baseman. He also liked hunting with his mom and gigging with friends. Later he participated in MANY gun shows. Jr worked for the Independent Stave Company of Lebanon, Missouri for 37 years and then worked 9 years for the City of Waynesville as a meter reader. Jr and Sandy were united in marriage October 9, 1999 and enjoyed 21 beautiful and loving years of marriage. Jr was also baptized in 1999 and went home to be with his Lord, Saturday, November 14, 2020 in his home at the age of 65. He will be missed greatly but fondly remembered by all those who knew and loved him. Jr leaves to cherish his memory, his wife: Sandra Willis of the home; one son: Chuck Willis (Errin) of Waynesville, MO; stepson: Erick Enneking (Dasha) of Waynesville, MO; stepdaughter: Jessica Enneking of Waynesville, MO; six grandchildren: Tyler, Chase, Parker, Hunter, Titus, and Ellie; two sisters: Dianna Sternberg (Paul) of Lynchburg, MO; Deborah Adams (Edward) of Lake Ozarks, MO; several nieces, nephews, other relatives and friends. Graveside services were held at 1:00 p.m. Wednesday, November 18, 2020 in the Long Hollow Cemetery of Evening Shade, Missouri with Erick Enneking and Paul Sternberg officiating. The song “Please Remember Me” was played. Serving as escorts were Charlie Penley, Clifford Penley, Ron Barton, James Walters, Shannon Green, Eddie Sternberg, John Regier, and John Branstetter. Serving as honorary escorts were Larry Price, Wayne Smith, Tony Clark, and Dennis Sternberg. Services were under the direction of Memorial Chapels and Crematory of Waynesville / St. Robert. Memorial contributions may be made in memory of Jr. Willis and may be left at Memorial Chapels and Crematory of Waynesville / St. Robert.

Volley Walter Willis, Jr., also known as Red by many friends, was one of three children born to the union of the late Volley W. Willis and Ruth Olivia (Miller) Willis, was born October 5, 1955 in Ironton, Missouri. Jr attended all 12 years... View Obituary & Service Information

The family of Volley Walter Willis Jr. created this Life Tributes page to make it easy to share your memories.