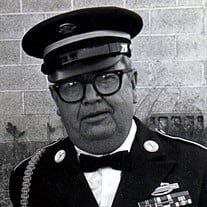 1SG (Ret) Walter Barton Dixon, one of seven children born to the union of the late Donnie Lee and Blanch Gertrude (McCarty) Dixon, was born October 8, 1928 in Shawnee, Oklahoma. He passed away Saturday, February 1, 2020 in the Phelps County Medical Center of Rolla, Missouri. Walter was 91-years-old. As a young boy, Walter grew up in South Eastern Missouri around Essex, Missouri and attended Gray Ridge High School. At the age of 16, Walter entered the United States Army and fought in World War II. At the end of the war, Walter came home and did some cotton farming before enlisting in the U.S. Army again. Shortly after enlisting, Walter was sent to Korea to serve in the Korean War. On May 18, 1951, Walter was reported killed in action. President Harry S. Truman sent Walter’s family a letter informing them of his passing. In reality, Walter was captured and held as a prisoner of War (P.O.W.) for the next 28 months. Walter was promoted to Sergeant after his release. Walter is a three-time-war veteran. He also served in Korea a second time and in Vietnam. Walter retired as a First Sergeant after 25 years of faithful service. Walter was awarded seven Purple Hearts and two Bronze Stars, along with other awards. Walter was also very instrumental in the founding of the Drill Sergeant’s School at Fort Leonard Wood. On February 22, 1955, Walter was united in marriage to Aldine “Dee” May Fenton, whom he had known since she was 8-years-old. They grew up as next door neighbors. Dee was a journalist for the local newspaper and she wrote Walter’s first obituary for the newspaper while Walter was a Korean War P.O.W. Walter and Dee shared over 61 years of marriage together and were blessed with three children: Richard Wade, Russell Walter and Randi Jo. After retiring from the military, Walter sold life insurance and worked with his brother Joe in the heavy equipment business for many years. Walter enjoyed being outdoors in his spare time: hunting and fishing. He looked forward to deer camp every year. He was also a great cook and enjoyed cooking for his friends and family. Walter was quite the storyteller and he spoke for many organizations throughout his later years. He wrote poetry as well and one of his poems was entitled “The Answer” which talked about his answers to people’s questions about being a prisoner of war. Walter was a member of the Waynesville / Ft. Wood Shrine Club, the Waynesville Masonic Lodge #375 AF & AM and the world-famous Road Ride Club, which he was proud of. Walter enjoyed visiting with all of his lifelong friends he made in these organizations. Walter leaves to cherish his memory, two sons: Richard Dixon of Austin, TX and Russ Dixon and wife Esther of Waynesville, MO; one daughter: Randi Jo Dixon-Long and husband Graham of Bloomfield Hills, MI; twelve grandchildren; several great grandchildren; several nieces, nephews, other relatives and friends. In addition to his parents, Walter and was preceded in death by his wife Dee Dixon; two sisters: Lorain and Ruby; and four brothers: Wilson, Wesley, Woody and Burton Joe. Even though he is gone from our sight, Walter’s memory, stories and bravery will live on in our hearts forever. Services were held at 10:00 a.m. Tuesday, February 11, 2020 in the Faith Baptist Church of Waynesville with Pastor Danny Graves officiating. Keith Pritchard, Civilian Aide to the Secretary of the Army, also spoke and recalled many of Walter’s accomplishments in the military. The song “Wind Beneath My Wings” was played and soloist Becky Lercher sang “It Is Well With My Soul”. Interment with military honors followed in the Missouri Veterans Cemetery of Waynesville and military honors were provided by the United States Army of Fort Leonard Wood, Missouri with CSM Douglas Galick presenting the flag. Services were under the direction of Memorial Chapels and Crematory of Waynesville / St. Robert. Memorial contributions are suggested in memory of Walter Dixon to the Shriners Hospital for Crippled Children and may be left at the funeral home.

1SG (Ret) Walter Barton Dixon, one of seven children born to the union of the late Donnie Lee and Blanch Gertrude (McCarty) Dixon, was born October 8, 1928 in Shawnee, Oklahoma. He passed away Saturday, February 1, 2020 in the Phelps County... View Obituary & Service Information

The family of 1SG (Ret) Walter Barton Dixon created this Life Tributes page to make it easy to share your memories.