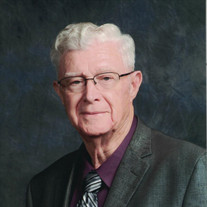 Walter C. Gray, 89, of Sandusky, passed away after a brief illness on December 31, 2021 at Providence Care Center. He was born on April 8, 1932 in Waynesville, MO to the late William Clayton and Florence Ida (Phillips) Gray. He was a 1949 graduate... View Obituary & Service Information

The family of Walter C. Gray created this Life Tributes page to make it easy to share your memories.

Walter C. Gray, 89, of Sandusky, passed away after a brief illness...