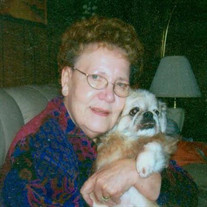 Waltraud “Christa” Carpenter, daughter of the late Walter and Wilhelmine (Schäfer) Gutzeit, was born September 14, 1933 in Berlin, Germany where she grew up and attended school. On September 29, 1960 in Berlin, Christa was united in marriage to the love of her life, Murlin Ralph Carpenter, a United States Army soldier whom she had met while he was stationed in Germany. They shared over 55 years together and many wonderful memories. Christa had the privilege of being a housewife for the majority of her adult life. She loved taking care of their home and of her husband. In her spare time, she enjoyed gardening, baking and cooking. Christa had a special place in her heart for animals, especially the many dogs she had throughout her life. In the last few years, her constant companions were her two dog babies, Berlin and Peaches. She loved them dearly and spoiled them greatly. She was a member of the SPCA and the VFW Wives Clubs. Christa passed away Wednesday, December 9, 2015 in the Mercy Hospital of Springfield, Missouri having attained the age of 82 years, 2 months and 25 days. She will be sadly missed, but fondly remembered by all those that knew and loved her. Christa leaves to cherish her memory, her husband: Murlin Ralph Carpenter of the home; one sister: Ingrid Stürmer of Berlin, Germany; two sisters-in-law: Jeanie Waiting of Chicago, IL and Sherry Carpenter of Quincy, IL; one brother-in-law: Larry Carpenter of Denver, CO; her two dog babies: Berlin and Peaches; several nieces, nephews, other relatives and friends. In addition to her parents, Christa was preceded in death by one brother. Services were held at 10:00 a.m. Friday, December 11, 2015 in the Memorial Chapels and Crematory of Waynesville / St. Robert with Rev. Chris Hendrix officiating. Serving as escorts were the St. Robert Police Department. Burial followed in the Missouri Veterans Cemetery of Waynesville, Missouri.

Waltraud &#8220;Christa&#8221; Carpenter, daughter of the late Walter and Wilhelmine (Schäfer) Gutzeit, was born September 14, 1933 in Berlin, Germany where she grew up and attended school. On September 29, 1960 in Berlin, Christa was... View Obituary & Service Information

The family of Waltraud Christa Carpenter created this Life Tributes page to make it easy to share your memories.

Waltraud “Christa” Carpenter, daughter of the late Walter and...