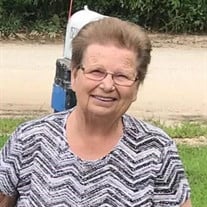 Wanda Jane Julian, daughter of the late Henry Morgan and Daisy Irene (Courson) Harlan, was born April 5, 1941 in St. Robert, Missouri. She went home to be with the Lord on Sunday, May 17, 2020 in the Mercy Hospital of Springfield, Missouri having attained the age of 79 years. Wanda grew up in Pulaski County and graduated from Waynesville High School in 1958. At a young age, Wanda was baptized and attended Gospel Ridge Union Church. On April 5, 1961, Wanda was united in marriage to a United States Army soldier, Thomas Marion Julian, Sr. in St. Robert, Missouri. They shared over 49 years of marriage and were blessed with four children: Tom, Debra, Laura, and April. Due to Tom being in the military, Wanda and the family moved to Ft. Hood, Texas. When he was deployed, Wanda came back to the St. Robert area and raised her children. After Tom retired from the military, they decided to make St. Robert their permanent home. Wanda worked hard and took great pride in helping to provide for her family. She worked in food service most of her working years; working at Sunset Village and then became Director of Food Service for the Dixon R-1 School District. She retired in 2001. Wanda loved children and she spent a lot of time taking care of children and grandchildren for many years. In her spare time, Wanda enjoyed volunteering with Girl Scouts and Boy Scouts and also at the Waynesville schools. She spent many hours at the school helping with book fairs and baking cookies every week for several classes. She was lovingly known as Mamaw by hundreds of children. She liked to play bingo, and shop at Kohls, but most importantly, she loved spending time with her family and looked forward to every family function that they could be together. She loved attending all her grandchildren’s events; whether it was sports, school programs, etc. you would find her in the stands cheering them on. Wanda will be sadly missed, but fondly remembered by all those that knew and loved her. She leaves to cherish her memory, her four children: Thomas M. “Tom” Julian, Jr. of St. Robert, MO, Debra Lynn Snider (John) of St. Robert, MO, Laura Morgan of St. Robert, MO and April Rodriguez (Rod) of Waynesville, MO; one brother: Paul Harlan (Sue) of Leasburg, MO; nine grandchildren: Zachary Julian (Alex), Skyler Julian (Kayla), Anna Julian, Ashley Key, Amanda Ross (Ted), Courtney Sherman (Jeremy), Caleb Rodriguez, Alex Rodriguez and Rachel Morgan; nine great grandchildren: Carter and Skyelynn Julian, Denver Julian, Preston, Aubrey, and Noah Ross, and Addilynn, Levi and Oliver Sherman; two sisters-in-law: Dorothy Harlan and Georgia Begalla; several nieces, nephews, other relatives and friends. In addition to her parents, Wanda was preceded in death by her husband: Thomas Marion Julian, Sr.; two brothers: Calvin and Norman Harlan; and one sister: Pansy Kragh. Funeral services were held at 11:00 a.m. Friday, May 22, 2020 in the Memorial Chapels of Waynesville with Rev. Dave Hokanson and Pastor Richard Breeden officiating. The songs “Amazing Grace” by Elvis Presley and “Peace in the Valley” by Red Foley were played. Serving as escorts were Zach Julian, Skyler Julian, Caleb Rodriguez, Alex Rodriguez, Ted Ross, John Snider and Rod Rodriguez. Private family burial was held in the Missouri Veterans Cemetery of Waynesville. Memorial contributions may be made in memory of Wanda Julian to the Waynesville R-VI School District Snack in a Pack Program and may be left at Memorial Chapels and Crematory of Waynesville / St. Robert.

Wanda Jane Julian, daughter of the late Henry Morgan and Daisy Irene (Courson) Harlan, was born April 5, 1941 in St. Robert, Missouri. She went home to be with the Lord on Sunday, May 17, 2020 in the Mercy Hospital of Springfield, Missouri... View Obituary & Service Information

The family of Wanda Jane Julian created this Life Tributes page to make it easy to share your memories.