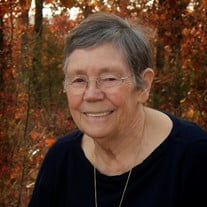 Wanda Pauline (Hicks) Nichols of Saint Robert, MO passed away on Christmas Day, surrounded by her family, having attained the age of 81 years, 4 months and 26 days. Born July 26, 1935, in Sullivan County, Tennessee, to Maudie Pauline Hicks, Wanda was preceded in death by her mother, and stepfather, Joe Nelson. On Nov. 10, 1957, she married her high school sweetheart, Roy H. Nichols, at West Hills Christian Church, in Blountville, TN, while he was home on leave from the Army. They returned to Ft. Leonard Wood/Waynesville, MO, and called it home for the next 59 years. They were also among the founding members of the First Christian Church in Waynesville. She grew up an only child, moving throughout the Appalachian Mountains, as Joe, her Stepfather, was a much sought after quarry and dynamite man. She loved math. Her first job was as a bookkeeper at a machine shop in Bristol, TN. She later worked as a cook for 20 years in the Waynesville schools, allowing her to be at home when her children were at home. Wanda was gifted with many talents and she used these to provide for her family, church and community. She loved to sew, cook and canned lots of produce from the family’s garden. She taught Sunday school and VBS as well. She instilled a love of reading and a passion for cooking and baking in many of her children and grandchildren. Many hours were spent around the kitchen table playing Scrabble. In all of her undertakings she sought to be “The wife of noble character” found in the book of Proverbs, chapter 31. “Whose husband praised her and her family arose and called her blessed.” Wanda is survived by her husband Roy of the home, and leaves a noble legacy to their 6 children and grandchildren- Pennie Ranzetta (Paul), of St Louis; Tony Nichols (Jani) of Lebanon; David, of Waynesville; Lisa Juelfs (Mike), of St. Louis; John Nichols (Michele), of Dixon; and Becky Nichols-Roberts (Nathan) of Rhinelander WI; 11 grandchildren- Joe, Clara and Sam Ranzetta; Dakota and Sawyer Nichols; Noah and Hannah Juelfs; Kennedy and Cole Nichols; Jessica and Nathan Roberts II. Services were held at 12:00 p.m. Friday, December 30, 2016 in the First Christian Church of Waynesville, Missouri with Pastor Roy Gilkey officiating. Soloist Becky Lercher sang “O Holy Night” and led the congregation in singing “Silent Night” and “The Love of God”. Serving as escorts were Joe Ranzetta, Clara Ranzetta, Sam Ranzetta, Dakota Nichols, Sawyer Nichols, Noah Juelfs, Hannah Juelfs, Kennedy Nichols, Cole Nichols, Jessica Roberts and Nathan Roberts II. Burial followed in the Missouri Veterans Cemetery of Waynesville, Missouri. Services were under the direction of Memorial Chapels and Crematory of Waynesville / St. Robert. A memorial has been established to the First Christian Church or the Gasconade Christian Service Camp and contributions may be left at the funeral home.

The family of Wanda Pauline Nichols created this Life Tributes page to make it easy to share your memories.