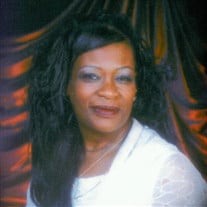 Wanda Williams, daughter of Ben and Fannie (Stokes) Torian, was born December 2, 1955 in Detroit, Michigan. She passed away Friday, January 19, 2018 in the General Leonard Wood Army Community Hospital of Fort Leonard Wood, Missouri having attained the age of 62 years. Wanda grew up in Detroit and graduated from high school. On April 27, 1974, she was united in marriage to Roosevelt Williams and they were blessed with four children: Renaldo, Christina, Anya and Angelo. Due to Roosevelt being in the United States military, they relocated to the Waynesville, Missouri area and Wanda began working as a Civil Service employee on Fort Leonard Wood. She served faithfully as an equal opportunity counselor and took great pride in her work in helping her clients. Wanda was a very loving wife, mother and grandmother and loved spending time with her family, especially the grandchildren. She loved her family deeply and even though she is gone from their sight, her love will remain in their hearts forever. Wanda leaves to cherish her memory, her husband: Roosevelt Williams of Waynesville, MO; four children: Renaldo Williams of Waynesville, MO, Christina Williams of St. Roberts, MO, Anya Williams of Waynesville, MO and Angelo Williams of the state of Utah; her father Ben Torian of the state of Florida; eight grandchildren, one great grandchild and many other relatives. Services were held at 1:00 p.m. Friday, January 26, 2018 in the Memorial Chapels and Crematory of Waynesville / St. Robert with Pastor Christopher Hendrix officiating. The songs “Song for Mama” by Boyz II Men, “You Are Not Alone” by Michael Jackson and “I Will Always Love You” by Whitney Houston was played. Inurnment followed in the Missouri Veterans Cemetery of Waynesville, Missouri. Memorial contributions may be made in memory of Wanda Williams and may be left at the Memorial Chapel and Crematory of Waynesville.

The family of Wanda (Torian) Williams created this Life Tributes page to make it easy to share your memories.

Wanda Williams, daughter of Ben and Fannie (Stokes) Torian, was...