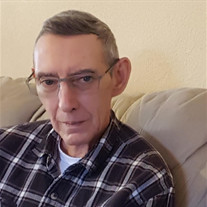 SFC (Ret) Watts Truman Sloas, son of the late Samuel Estill and Florence Marie (Porter) Sloas, was born October 28, 1948 in Dobbins, Kentucky where he grew up on a tobacco farm. At the young age of 18, Watts entered the United States Army and served his country faithfully until his retirement. He had attained the rank of Sergeant First Class and earned several awards and commendations; some of which include: the National Defense Service Medal, Armed Forces Expeditionary Medal and Good Conduct Medal (2nd Award). At the time of his retirement, he was stationed at Fort Leonard Wood, Missouri and decided to stay in the Waynesville / St. Robert area. On April 20, 2007, Watts was united in marriage to Chong Ae Kang in St. Robert, Missouri. They shared over 10 years of marriage together and many wonderful memories. After his retirement, Watts was able to do more of the things he enjoyed. He liked to keep busy and was always doing a handyman jobs; whether it was mowing lawns or mechanic work. He also enjoyed being outdoors while fishing and he loved to watch John Wayne movies and cartoons. Most importantly, he loved his family and enjoyed spending time with them, especially the grandchildren. Watts passed away Sunday, December 17, 2017, in his home in St. Robert, Missouri having attained the age of 69 years. He will be sadly missed, but fondly remembered by all those that knew and loved him. He leaves to cherish his memory, his wife, Chong of the home; his two daughters, Rhonda Watts of Colorado Springs, CO and Mary Sloas of St. Robert, MO; his son, Samuel Sloas of St. Robert, MO; six grandchildren; four brothers, Estill Sloas, Jr of Willard, KY, Darrell Sloas (Carol) of Grayson, KY, Gerald Sloas (Bonnie) of Webbville, KY, and Edward Sloas (Charlene) of Grayson, KY; four sisters, Rosie Justice (Seth) of Grayson, KY, Norma Sloas of Grayson, KY, Linda Handloser (Art) of Ashland, KY, and Jewell Sprouse (Bobby) of Grayson, KY; a number of nieces and nephews; as well as a host of other relatives and friends. Graveside services with military honors were held at 1:00 p.m. Thursday, December 21, 2017 in the Missouri Veterans Cemetery of Waynesville with Pastor Lee Youngdae and Chaplain Peter Park officiating. Serving as escorts and providing military honors were the United States Army of Fort Leonard Wood, Missouri. Services were under the direction of Memorial Chapels and Crematory of Waynesville / St. Robert. Memorial contributions may be made in memory of Watts Sloas and may be left at the funeral home.

SFC (Ret) Watts Truman Sloas, son of the late Samuel Estill and Florence Marie (Porter) Sloas, was born October 28, 1948 in Dobbins, Kentucky where he grew up on a tobacco farm. At the young age of 18, Watts entered the United States Army... View Obituary & Service Information

The family of SFC (Ret) Watts Truman Sloas created this Life Tributes page to make it easy to share your memories.