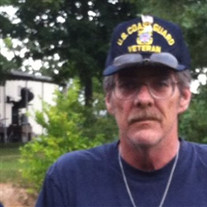 Wayne “Half Breed” Edward Guy Medlock, twin son of the late Wayne Eugene Guy Medlock and Sandra Young, was born October 7, 1951 in Oakland, California. He passed away Monday, July 28, 2014 in the University of Missouri Hospital and Clinics of Columbia, Missouri. He had attained the age of 62 years, 9 months and 21 days. Wayne grew up in California and graduated from Oakland High School. As a young man he entered the United States Coast Guard and served his country faithfully until his honorable discharge. He served in many places including Hawaii at Pearl Harbor and earned the National Defense Service Medal, Vietnam Service Medal with One Bronze Star and Republic of Vietnam Campaign Medal with Device. Wayne was very talented when it came to auto mechanics. He was the “master shade tree mechanic” for many years and did work for a time with Pep Boys and later retired from Auto Zone. On May 10, 2012, Wayne was united in marriage to Peggy Sue McCulley in Waynesville, Missouri. They shared the last two years together and many wonderful memories. Wayne was a very active person. He loved all kinds of fishing, whether it was bass fishing or fly fishing, he loved to be on the water. He enjoyed going to truck and tractor pulls, watching NASCAR and wrestling. He had a love for motorcycles and enjoyed riding them. He was a Hell’s Angels for many years and later retired from the organization and became a member of the Earth Shakers and served as Chapter President in the late 1970’s through the early 1980’s. Even though Wayne was a mover and a shaker, he also enjoyed the simple things in life – like a good cup of coffee and spending time with his family and friends. According to his family, he was an “awesome father and grandfather”. Wayne will be dearly missed, but fondly remembered by all those that knew and loved him. He leaves to cherish his memory, by his wife: Peggy Medlock of St. Robert, MO; seven children: Krista Keith of St. Robert, MO, David Medlock of St. Robert, MO, Christopher Medlock (Heather) of Walker, LA, Jeremy Breuklander (Megan) of St. Robert, MO, Billy Breuklander of St. Robert, MO, Amber Soens of Jefferson City, MO and Sarah Mouton (Jerome) of Iota, LA; eighteen grandchildren: Kelly, William, Gillian, Cory, Tori, Madison, Benjamin, Matthew, Allexis, Angelina, Ashtin, Gavin, Gabriel, Jonathan, Shelby, Lillie, Charlie and Victoria; six siblings: Pam Greg, Mark Medlock, Kenny Medlock, Charlotte Cone and Waynell Medlock (Wayne’s twin sister) all of the state of California and Robert Medlock of the state of Oregon; dear friends: John and Oresta Talbot and their children: Roxie, John Michael and Hannah, all of Shelbyville, TN; several nieces, nephews, other relatives and a host of friends. In addition to his parents, Wayne was preceded in death by his stepmother: Rosalee Medlock; two brothers: Darryl and Raymond Medlock; and one stepbrother: Dan Borden. Funeral services were held at 2:00 p.m. Friday, August 1, 2014 in the Memorial Chapels and Crematory of Waynesville / St. Robert with Rev. Christopher Hendrix officiating. Wayne’s son, Chris Medlock, thanked everyone for being present to remember his father. The songs “Amazing Grace”, “I’ll Fly Away”, “His Eye Is on the Sparrow” and “When I’m Gone” were played. Serving as escorts were Jeremy Breuklander, John Talbot, Chris Medlock, David Medloc, Kelly Medlock and Corey Medlock. Serving as honorary escorts were William Medlock and Billy Breuklander. Burial with military honors followed in the Missouri Veterans Cemetery of Waynesville. Military honors were provided by the United States Coast Guard and the Missouri Honors Team. Services were under the direction of Memorial Chapels and Crematory of Waynesville / St. Robert. Memorial contributions may be made in memory of Wayne Medlock and may be left at the funeral home.

The family of Wayne "Half Breed" Edward Guy Medlock created this Life Tributes page to make it easy to share your memories.