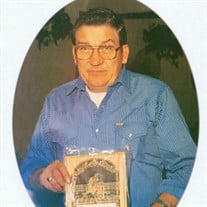 Wendell Laverne Wilson, son of the late Earl and Alma (McDonald) Wilson, was born December 27, 1937 in Princeton, Missouri. In 1941, Wendell and his family moved to Waynesville where he grew up and attended school. Wendell was raised to be a hard worker. In fact, at the young age of 13 or 14, Wendell began his first job. He worked at the local IGA Grocery store. Later he began his own business and operated Downtown 66, a mechanic shop, for many years. On September 27, 1958, Wendell was united in marriage to Carolyn Sue Quesenberry in Miami, Oklahoma. They shared over 44 years of marriage together and were blessed with three children: James Arthur, Tamera and John. Wendell was a family man and loved his children dearly. He was the cornerstone of his family and any time they had a question, he was the one they came to. He not only loved his children dearly but his grandchildren and great grandchildren as well and treasured the times he was able to spend with them. In his spare time, he loved raising animals and gardening on the family farm. Other hobbies included racing cars and hunting. When he was younger, you would find him at all the local and statewide horse shows and he would compete in barrel racing. Wendell was a kind and caring person. If you needed something, he was there to lend a hand or even give you the shirt off of his back if need be. He was a friendly person and never met a stranger. Wendell passed away Friday, November 24, 2017, in his home near Waynesville having attained the age of 79 years 10 months and 28 days. He will be sadly missed but fondly remembered by all those that knew and loved him. Wendell leaves to cherish his memory, his son, John Wilson and his wife Sherry of Waynesville, MO; his daughter, Tamera Wilson of Waynesville, MO; a sister, Carolyn Bufalo of Tulsa, OK; five grandchildren, Becki Palacios and her husband Wesley, Keith Campbell, Michael Wilson, Christopher Wilson and wife Kiley, and Shelby Wilson; four great-grandchildren, Nathan, Noah, and Natalie Acosta and Hunter Campbell; cherished friend: Judy Johnson; a number of nieces and nephews; as well as a host of other relatives and friends. In addition to his parents, Wendell was preceded in death by his wife, Carolyn Sue Wilson; his son, James Arthur “Jay” Wilson; five brothers: Ogle, Lloyd, Clayton, Dewey and Larry Wilson; and one sister, Virginia Ramey. Services were held at 11:00 a.m. Saturday, December 2, 2017 in the Memorial Chapels and Crematory of Waynesville / St. Robert with Pastor Danny Graves officiating. The songs “The Other Side” by Colton Dixon and “Go Rest High on that Mountain” by Vince Gill were played. Serving as escorts were Jimmy, Jay and Joey Laughlin, Michael and Christopher Wilson and Hunter Powers. Serving as honorary escorts were Larry Chadwell and Jim Bales. Burial followed in the Waynesville Memorial Park Cemetery of Waynesville. Services were under the direction of Memorial Chapels and Crematory of Waynesville / St. Robert. Memorial contributions may be made in memory of Wendell Wilson and may be left at the funeral home.

Wendell Laverne Wilson, son of the late Earl and Alma (McDonald) Wilson, was born December 27, 1937 in Princeton, Missouri. In 1941, Wendell and his family moved to Waynesville where he grew up and attended school. Wendell was raised... View Obituary & Service Information

The family of Wendell Laverne Wilson created this Life Tributes page to make it easy to share your memories.