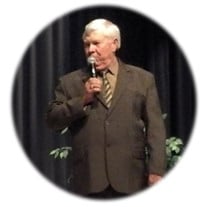 William Preston “Bill” Anderson, son of the late Leslie Leroy and Ethel Beatrice (Wood) Anderson, was born January 27, 1945 in Falcon, Missouri. He went home to be with his Lord Tuesday, November 20, 2018 in his home. On September 1, 1963, Bill was united in marriage to Nancy Sue Hall at Fairview Baptist Church in the township of Hanna of Pulaski County, Missouri. They shared over 55 years of marriage together and were blessed with two sons, Bill and Brian. Bill served as a civil service employee on Fort Leonard Wood for many years before he retired. He worked for DOL, Supply Division and the General Leonard Wood Army Community Hospital. At a young age, Bill made a profession of faith and out of his love for the Lord, his passion in life became singing. He was known for his signature “old time” bass singing style and he could sing those low notes with the “best of the best”. He sang with several local artists and family members for over 60 years; some of those quartets were: The Royal Sons, King James Version, Buckhorn Four, Good News Quartet, Blue Springs Quartet, Cornerstone 33 A.D., Anderson Crew & Mike, and was an original member of Covenant Quartet (who he sang with until his health began to decline). Bill leaves to cherish his memory, his wife: Sue Anderson of the home; two sons: Bill Anderson (Denise) of Windermere, FL and Brian Anderson (Martha) of Republic, MO; six grandchildren; twenty great grandchildren; two great-great grandchildren; one brother: Lindell Anderson (Lenora) of Fort Worth, TX; three sisters: Vera Rinck (Bill) of Newburg, MO, Joyce Blankenship (Clark) Laquey, MO and Marilyn Anderson of Judith Gap, MT; several nieces, nephews, other relatives and many friends. In addition to his parents, Bill was preceded in death by two sisters: Violet Collins and Evelyn Crossland; one granddaughter: Rose Marie Wagoner; and one nephew: Eric Blakenship. Bill’s faith was very important to him and we know there is a great celebration going on in heaven. He was deeply loved by his family and friends and will be missed greatly. Services were held at 2:00 p.m. Friday, November 23, 2018 in the Faith Baptist Church of Waynesville with Pastor Danny Graves officiating. Music was provided by Gilbert Crismon and Covenant Quartet. Serving as escorts were Will “Bubbs” Anderson, Brandon Anderson, John Anderson, Tim Anderson, Brian Anderson, Randy Wood, Terry Collins, Bill Anderson and Doug Crossland. Burial followed in the Idumea Cemetery of Laquey, Missouri. Services were under the direction of Memorial Chapels and Crematory of Waynesville / St. Robert.

William Preston &#8220;Bill&#8221; Anderson, son of the late Leslie Leroy and Ethel Beatrice (Wood) Anderson, was born January 27, 1945 in Falcon, Missouri. He went home to be with his Lord Tuesday, November 20, 2018 in his home. On September... View Obituary & Service Information

The family of William Preston "Bill" Anderson created this Life Tributes page to make it easy to share your memories.