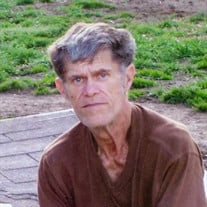 William Alva “Bill” Bales, Jr., only child born to the late William Alva Bales, Sr. and Dorcas Asilea (Williams) Bales, was born at home at Mossy Springs on February 16, 1949. He attended school in the Waynesville School District and graduated from Waynesville High School in 1967. On April 4, 1969, Bill was united in marriage to Helen K. Johnson. They shared 44 years of marriage together and were blessed with two children: William A. Bales III “Billy” and Asilea K. Bales Edwards “Sissy”. Bill made a profession of faith and was baptized on March 25, 1973 at Hickory Hills Baptist Church. He attended and served as a deacon and Sunday School teacher in several area churches throughout his lifetime. Bill held a variety of jobs throughout the years; including appliance repair for Lynch’s Furniture and Appliance, managing Lynch’s Furniture Factory, and foreman of the tactical body repair shop on Fort Leonard Wood. Bill also worked for Bales Construction, doing different jobs at various times and also owned his own gravel plant. However, the position Bill was proudest of was being a simple farmer on his farm in Laquey. Bill was a good provider, had a strong work ethic and was always willing to help others. In his spare time, Bill enjoyed all types of hunting: coon, deer, turkey, rabbit and squirrel. He loved working on his farm and cutting wood. He enjoyed singing and would sing at church or even to his cows. He loved fixing washers and dryers for “little old ladies”, but he especially cherished spending time with family and friends, especially the grandkids. Bill was a member of the Coon Hunters Club, Pulaski Hospital Board, Extension Council and at one time served as a reserve Deputy Sheriff. Bill went home to be with his Lord Thursday, July 17, 2014 in his home having attained the age of 65 years. He will be sadly missed by all those that knew and loved him. Bill leaves to cherish his memory, two children: William Alva Bales III “Billy” and wife Tammy of Laquey, MO and Sissy Edwards and husband Russ of Laquey, MO; four grandchildren: Ashley Edwards, William Alva Bales IV “Willie”, Leigha Edwards and Amanda Bales; the love of his life: Helen Bales of Laquey, MO; several other relatives and friends. Services were held at 6:00 p.m. Tuesday, July 22, 2014 in the Memorial Chapels and Crematory of Waynesville / St. Robert with Rev. Danny Graves officiating. The songs “Daddy’s Hands”, “In the Garden” and “God Gave Me You”. Soloist Charlas Bales sang “Amazing Grace”. Several of Bill’s friends and families recalled their great memories of Bill. Serving as honorary escorts were Ashley Edwards, William Alva Bales IV “Willie”, Leigha Edwards and Amanda Bales. Memorial contributions may be made in memory of Bill Bales and may be left at the funeral home. .

The family of William Alva "Bill" Bales Jr. created this Life Tributes page to make it easy to share your memories.