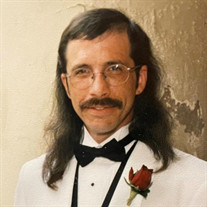 William “Bill” D Bradish of Crocker, MO, died August 7th, 2021 at the age of 58. After growing up an Army “brat”, Bill graduated from Waynesville High School, Waynesville, MO, and served in the US Army as a medic for 3 years. His primary duty station was Berlin, West Germany, before the iron curtain fell. That experience affected him greatly. He returned to Missouri after honorable discharge and spent the remainder of his life in the Pulaski County, MO area as a woodworker, a laborer, a truck driver, a food services associate, an everyman who loved his co-workers, his family and his friends unconditionally. He loved to tell story and share laughter with all. Bill loved working with his hands, particularly his talented woodworking. Bill married Carla (Skinner) Guest in 2010 and is survived by three stepdaughters, Devon Morgan and Amy Brown, both of Missouri, and Magan Hall of VA. He cherished his time as devoted papaw to six little ones: Brandon Charles Billups, Nolan John Morgan, Deja Michelle Jennings, Marvin Jennings III, Zane Juandell Recio. He was preceded in death by his parents, Charlotte and William Dudley Bradish, and by his wife Carla who passed away one day ahead of him. He is survived by a sister and brother-in-law, Susan K. Bradish (James I. Magee) of Kentucky. Inurnment will be held at a later date in the Antioch Cemetery near Crocker, MO. Arrangements are under the direction of Memorial Chapels and Crematory of Waynesville / St. Robert.

The family of William "Bill" D. Bradish created this Life Tributes page to make it easy to share your memories.