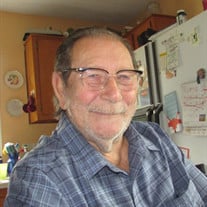 William Wayne Hill, son of the late Scott Clifford Hill and Effie Mable (Bryant) Hill, was born May 28, 1934 in Waynesville, Missouri. He passed away Thursday, November 26, 2020 in his home having attained the age of 86 years. William grew up in the Laquey area and went to the old Prospect School before attending Richland High School. Except for a brief period of time in Kansas, he has been in the Laquey area for the entirety of his life. On August 20, 1967, William was united in marriage to Maudie Alice Tomlinson in Newburg, Missouri. They shared over 53 years of marriage together and were blessed with three children: Wayne, Judy, and Allen. William worked for a short time as a janitor at the old Waynesville Hospital while still in school. While he was in Kansas, he worked at Van Camps Manufacturing before returning to the Laquey area where he started working for Brizzmen Sawmill. He was employed there from 1969 until the mill closed in 1993. In his spare time, you would find William out in his yard feeding the squirrels, cats, and wildlife. He enjoyed going out at night to look at the moon and also enjoyed going fishing with his family. He and his father would catch some big ones. He loved playing with his grandchildren and taught them history about nature, animals, and the moon. As a young man, William made a profession of faith and was baptized. He was a member of the Idumea Baptist Church and attended whenever he could. William will be sadly missed, but fondly remembered by all those that knew and loved him. He leaves to cherish his memory, his wife: Maudie A. Hill of Laquey, MO; three children: Wayne Hill of Laquey, MO, Allen Hill (Kitty) of Rolla, MO and Judy Gifford (Mike Strait) of Jefferson City, MO; five grandchildren: Michelle Durreman (Cody) of Laquey, MO, Christopher Hamilton of Dixon, MO, Joshua Eberle of Rolla, MO, Matthew Gloss of Laquey, MO and Daniel Hill of Rolla, MO; five great grandchildren: Bryan, Dustin, Mary, Izan, and Ethan; two sisters: Anna May of the State of California and Hazel of the State of Arkansas; several nieces, nephews, other relatives and friends. In addition to his parents, William was preceded in death by five siblings. Services were held at 12:00 p.m. Wednesday, December 2, 2020 in the Memorial Chapels and Crematory of Waynesville / St. Robert with Pastor Danny Graves officiating. The songs “Amazing Grace” and “Rock of Ages” were played. Serving as escorts were Allen Hill, Matthew Gloss, Kevin Gloss, Christopher Hamilton, Michael Strait, and Cody Durreman. Serving as honorary escorts were Daniel Hill, James Skimore, and Mason Skidmore. Burial followed in the Idumea Cemetery of Laquey, Missouri.

William Wayne Hill, son of the late Scott Clifford Hill and Effie Mable (Bryant) Hill, was born May 28, 1934 in Waynesville, Missouri. He passed away Thursday, November 26, 2020 in his home having attained the age of 86 years. William... View Obituary & Service Information

The family of William Wayne Hill created this Life Tributes page to make it easy to share your memories.