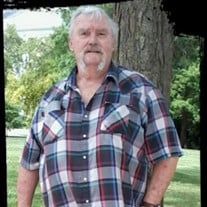 William Earl Maples, son of the late Harold Alfred and Dorothy (Baker) Maples, was born August 14, 1949 in Booneville, Missouri. As a young boy, William grew up in the Jefferson City area where he attended school. At the age of 17, William joined the United States Marines and served his country faithfully during the Vietnam War. He attained the rank of Corporal and earned the National Defense Service Medal, Vietnamese Service Medal w/ 1 star, Vietnamese Campaign Medal, Combat Action Ribbon and Sharp Shooter Rifle Badge. After his honorable discharge from the Marines, William went to Kansas for a time and in 2006, moved to Linn, Missouri and later to Holts Summit where he was currently residing. During this time, William worked as a musician-singing and playing guitar along with several other instruments. He enjoyed entertaining folks with music. On February 14, 2007, William was united in marriage to Sandra Lee Maples in California, Missouri. They shared 14 years of marriage together and many wonderful memories. In his spare time, William enjoyed being outdoors. You could find him either hunting or fishing. He was a member of the National Rifle Association (NRA), Veterans of Foreign Wars (VFW) and Freshwater Fishing. Most importantly, he loved spending time with his family and friends. William passed away Sunday, February 14, 2021 in his home having attained the age of 71 years. He will be sadly missed, but fondly remembered by all those that knew and loved him. He leaves to cherish his memory, his wife, Sandra of the home; his eleven children, Kandie Maples (Mike Prince) of Neodesha, KS, Laurie Horn (Kevin) of Rolla, MO, William Maples, Jr. (Karina) Frontenac, KS, Wallace Maples (Lisa) Chanute, KS, Tracey Jensen of Walnut, KS, Stacey Maples (Casey) of Walnut, KS, Jenny Fischer (Chris) of Jamestown, MO, Jannel Brum (Shawn) of Anchorage, AK, Wayne Cochran, Jr. of Girard, KS, Tonya Boynton of Farlington, KS, and Kim DeBrodie of Holts Summit, MO; several grandchildren, great-grandchildren, and great-great-grandchildren; his mother, Dorothy Maples; and a brother, Harold Maples (Deena) of Holt Summit, MO; as well as a host of other relatives and friends. Funeral Services will be held at 1 p.m. Wednesday, Feb. 24, 2021, in Memorial Chapels and Crematory of Waynesville/St. Robert. Burial with Full Military Honors will follow in Missouri Veterans Cemetery FLW in Waynesville, under the care and direction of Memorial Chapels and Crematory of Waynesville/St. Robert. Visitation will be from Noon until service time at 1 p.m. in the funeral home. Memorial Contributions in memory of William Maples may be left or mailed to the funeral home.

William Earl Maples, son of the late Harold Alfred and Dorothy (Baker) Maples, was born August 14, 1949 in Booneville, Missouri. As a young boy, William grew up in the Jefferson City area where he attended school. At the age of 17, William... View Obituary & Service Information

The family of William Earl Maples created this Life Tributes page to make it easy to share your memories.