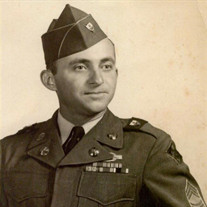 SFC (Ret) William R. McMillan, Jr., son of the late William McMillan and Lola Lee (Wilson) McMillan, was born November 21, 1923 in Millen, Georgia where he grew up and attended school. At the young age of 17, William was drafted into the United States Army and served during World War II, the Korean War and the Vietnam War. He served his country faithfully until his retirement on July 31, 1971. He had attained the rank of Sergeant First Class and his primary job was as a drill sergeant. He earned several awards and commendations; some of which include: Vietnam Service Medal with 1 Silver Star, the Republic of Vietnam Campaign Medal, the Army Commendation Medal and the Bronze Star Medal. After serving in the military, William received his college degree in food service and contracted on Fort Leonard Wood in food service as a manager for Toomb’s and Sons. He continued working, even after he officially retired, until his early 80’s. On October 26, 1950, William was united in marriage to Edith Drdla in Salfelden, Austria. They had met while he was serving in Austria and they shared over 65 years of marriage together and three children: William, Peggy and Eric. In his spare time, William enjoyed being outdoors. You could find him usually at the lake fishing with one of his fishing buddies. He was a member of the Harry L. Herron VFW Post #3176 of St. Robert, Missouri. Most importantly, he loved his family and enjoyed spending time with them. William passed away Wednesday, February 24, 2016 in the Missouri Veterans Home of St. James, Missouri having attained the age of 92 years. He will be sadly missed, but fondly remembered by all those that knew and loved him. William leaves to cherish his memory, his wife, Edith McMillan of Waynesville, MO; three children: William R. McMillan III (Marie) of Mount Laural, NJ, Peggy D Armbruster (Paul) of St. Louis, MO and Eric W. McMillan (Jackie West) of Springfield, MO; one brother: Tom McMillan of the state of Georgia; four grandchildren: Bonnie Rose Armbruster, Melissa and Chris Glassey, Robert W. McMillan and Eric T. McMillan; two great grandchildren: Summer and Kayla Glassey; nephew: Tim McMillan; other relatives and friends. In addition to his parents, William was preceded in death by one brother, Floyd; one sister, Joyce and one sister-in-law, Gertrude McMillan. Services were held at 12:00 p.m. Monday, February 29, 2016 in the Memorial Chapels and Crematory of Waynesville / St. Robert with Chaplain Keith Ferrell officiating. Mac’s son-in-law, Paul Armbruster, recalled his wonderful memories of Mac. Burial with military honors followed in the Missouri Veterans Cemetery of Waynesville. Military honors were provided by the United States Army of Fort Leonard Wood, Missouri. Memorial contributions may be made in memory of William McMillan to the Missouri Veterans Home of St. James, Missouri and may be left at the funeral home.

SFC (Ret) William R. McMillan, Jr., son of the late William McMillan and Lola Lee (Wilson) McMillan, was born November 21, 1923 in Millen, Georgia where he grew up and attended school. At the young age of 17, William was drafted into the... View Obituary & Service Information

The family of SFC (Ret) William R. McMillan, Jr. created this Life Tributes page to make it easy to share your memories.