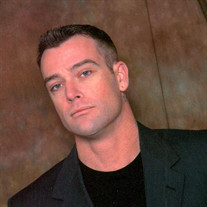 William Allen Redmond, son of Wayne Edward and Hildegard Katharina (Franz) Redmond, was born November 3, 1977 in San Francisco, California. Due to his father being in the military, William and the family moved and traveled around the world and eventually settled in the Waynesville / St. Robert area in 1985. William attended school and graduated from Waynesville High School in 1995. After graduation, William attended college for a time. He started working as a cab driver for the Post Cab Company and was employed with them for several years. He was also known for his tattoo art work and worked in many of the tattoo shops in the Waynesville / St. Robert area. William was a very active person. In his spare time, he enjoyed being outdoors while fishing, surfing, snowboarding, bike riding, white water rafting and 4-wheeling. He was also very creative and was a talented artist. He loved to spend time with his family and friends. For the last 18 years, William had been struggling with medical bi-polarism and took great solace in his family and friends helping him. William passed away in his home Friday evening, October 10, 2014 having attained the age of 36 years, 11 months and 7 days. William leaves to cherish his memory his parents: Wayne and Hildegard Redmond of St. Robert, MO; two brothers: Johannes Redmond, of Aurora, CO and Robert Redmond of St. Robert, MO; niece Kylie and nephew Dylan; and girlfriend: Traci Simpson of Waynesville, MO. Services were held at 10:00 a.m. Saturday, October 18, 2014 in the Memorial Chapels and Crematory of Waynesville with Father John Groner officiating. The songs “Here I Am, Lord”, “Prayer of St. Francis”, “On Eagle’s Wings” and “Amazing Grace” were played. Serving as escorts were Johann Redmond, Robert Redmond, Scotty McCall, Jesse Tanner, Jr., Will Spencer and Cat Spencer. Burial will follow in the Sunset Memorial Estates Cemetery of Waynesville. Services were under the direction of Memorial Chapels and Crematory of Waynesville / St. Robert. Memorial contributions may be made in memory of William Redmond and may be left at the funeral home.

William Allen Redmond, son of Wayne Edward and Hildegard Katharina (Franz) Redmond, was born November 3, 1977 in San Francisco, California. Due to his father being in the military, William and the family moved and traveled around the world... View Obituary & Service Information

The family of William Allen Redmond created this Life Tributes page to make it easy to share your memories.