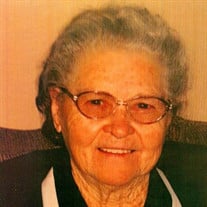 Willie Virginia (Whitmore) Brooks, one of eight children born to the union of the late Roy Lee and Violet Viola (Baker) Whitmore, was born May 12, 1933 in Boswell, Oklahoma where she grew up. She began her walk with God at Santa Paula United Pentecostal Church; where she was baptized in Jesus’ name and receive the gift of the Holy Ghost. On March 18, 1950, Willie was united in marriage to Nolan Alfred Brooks. They shared over 54 years of marriage together and were blessed with three children: Daniel, Charles and Billy. Nolan preceded her in death in 2004. Willie and Nolan lived in Oklahoma before moving to Santa Paula, California. In 1957, the family moved to Lompoc, California where Nolan and Willie established the United Pentecostal Church where they served until 1981. They moved back to Oklahoma and she assisted as pastor’s wife in Antlers, Oklahoma until Nolan’s passing. Willie loved being a pastor’s wife and devoted herself to serving and helping members of the church and community. In 2010, Willie moved to Waynesville, Missouri to be near family. In her spare time, she was very gifted when it came to quilting and sewing and enjoyed making things for her family and friends. She loved to sing and play the accordion, especially at church. She enjoyed participating in church activities and being around her church family. Willie also liked to be outdoors working in her garden. Most importantly, she loved her family and treasured every moment she could spend with them. Willie went home to be with her Lord and heard him say “Well done, thou good and faithful servant” on Sunday, August 7, 2016 in the Lake Regional Hospital of Osage Beach, Missouri having attained the age of 83 years. She will be sadly missed, but fondly remembered by all those that knew and loved her. Willie leaves to cherish her memory, her three children: Daniel Brooks (Janice) of Waynesville, Missouri, Charles Brooks (Mary Elizabeth) of Danville, Alabama and Billy Brooks of Lompoc, California and her nephew: Charles Perry of Antlers, Oklahoma whom she raised from the age of 12; twelve grandchildren; seventeen great grandchildren; one great-great granddaughter: Rylee Brooks; two sisters: Mary Bell of El Reno, Oklahoma and Vessie Willhite of Greenwood, Arkansas; numerous nieces, nephews, other relatives and friends. In addition to her parents and husband, Willie was preceded in death by five siblings: Lucille Brown, Denver Whitmore, Charlene McLaughlin, Roy “Buckshot” Whitmore and Bobbie (Whitmore) Akins. Funeral services were held at 1:00 p.m. Thursday, August 11, 2016 in the United Pentecostal Church of Muskogee, Oklahoma. Her remains were buried in the Ft. Gibson National Cemetery of Ft. Gibson, Oklahoma. Arrangements were under the direction of Memorial Chapels and Crematory of Waynesville / St. Robert.

Willie Virginia (Whitmore) Brooks, one of eight children born to the union of the late Roy Lee and Violet Viola (Baker) Whitmore, was born May 12, 1933 in Boswell, Oklahoma where she grew up. She began her walk with God at Santa Paula... View Obituary & Service Information

The family of Willie Virginia Brooks created this Life Tributes page to make it easy to share your memories.