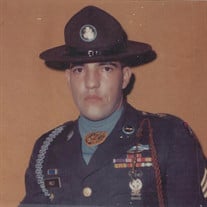 Willis Ray Holt, Sr., son of the late Melvin and Dixie Lorene (Givvens) Holt, was born December 31, 1941 in McFadden, Arkansas. At the age of 24, Willis entered the United States Army and served his country faithfully until his retirement in 1986. He had attained the rank of Sergeant First Class and earned several awards and commendations; some of which include: National Defense Service Medal, Vietnam Service Medal with 1 Silver Service Stars and 3 Bronze Service Stars, Vietnam Campaign Medal with 60 Device, Bronze Star Medal with V Device and Oak Leaf Cluster, Purple Heart with Oak Leaf Cluster, Army Achievement Medal, Combat Infantry Badge, Parachute Badge, Non-Commissioned Officer Professional Development Ribbon-3rd Level, Army Good Conduct Medal 6th Award, Army Service Ribbon, Overseas Service Ribbon 2nd Award and Expert Qualification Badge M-16. During his time in the military, Willis did his basic training at Ft. Leonard Wood, attended Airborne School at Ft. Bragg, served in Vietnam in 1967 and 1970, served in South Korea in 1974 and 1982, and Drill Instructor School at Fort Benning. At the time of his retirement, he was stationed at Fort Leonard Wood and he the family decided to remain in the area. On January 22, 1962, Willis was united in marriage to Bonnie Pearl Davis. They shared over 57 years of marriage together and were blessed with one son, Willis Ray Holt, Jr. After retiring from the military, Willis joined the police force and served as Chief of Police in Newburg for 5 years and served as police officer in Dixon for 3 years. After retiring from the police force, Willis was able to do more of the things that he enjoyed. He enjoyed working on cars and was a very good mechanic along with painting cars. He loved music and recording music, especially guitars. The one thing that was very important to him was his family. They came first and he was always making sure that they were taken care of and he looked forward to every time they could spend together. Willis passed away Monday, November 25, 2019 in the Lake Regional Hospital of Osage Beach, Missouri having attained the age of 77 years, 10 months and 25 days. He will be sadly missed, but fondly remembered by all those who knew and loved him. Willis leaves to cherish his memory, his wife: Bonnie Holt of the home; one son: Willis Ray Holt, Jr. (Cynthia) of Bonneau, SC; three grandchildren: Michael Miller, Tristina Dupree and Willis Ray Holt III; four siblings: Marilyn Camden (Montie) of Festus, MO, Delmar Holt (Pat) of DeSoto, MO, Doris Hayes (John) of Springfield, IL and Linda Miller of Festus, MO; numerous nieces, nephews, other relatives and friends. Services were held at 1:00 p.m. Wednesday, December 4, 2019 in the Memorial Chapels and Crematory of Waynesville / St. Robert with Willis’ brother-in-law, John Hayes officiating. The songs “How Great Thou Art” and “I’ll Meet You in the Morning” were played. Serving as escorts were the United States Army. Burial with military honors followed in the Missouri Veterans Cemetery of Waynesville. Military honors were provided by the United States Army of Fort Leonard Wood, Missouri. Memorial contributions may be made in memory of Willis Holt, Sr. and may be left at the funeral home.

Willis Ray Holt, Sr., son of the late Melvin and Dixie Lorene (Givvens) Holt, was born December 31, 1941 in McFadden, Arkansas. At the age of 24, Willis entered the United States Army and served his country faithfully until his retirement... View Obituary & Service Information

The family of SFC (Ret) Willis Ray Holt Sr. created this Life Tributes page to make it easy to share your memories.