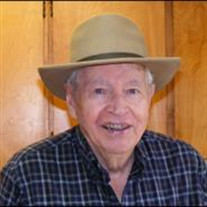 Willis Alvin Sutton, son of the late Alexander and Savilla Sutton, was born December 19, 1918 in Hanna, Missouri where he grew up and graduated from Richland High School with the Class of 1937. At a young age, Willis accepted the Lord Jesus Christ as his Savior and was baptized in a small creek in Hanna. In later years, when he was visiting Missouri, Willis always wanted to stop and go to that creek because it meant so much to him. Willis moved to Oregon at the age of nineteen and, except for visits home, resided there for the rest of his life. He worked as a longshoreman for many years and held various leadership positions within the union. Life really started to accelerate for Willis in November of 1965, when he was united in marriage to Lora June Webb and inherited two daughters, Vickie (14) and Cassie (12). They resided for many years at their farm on Haynes Inlet, outside of North Bend, Oregon, where he enjoyed raising Charolaise cattle and growing gardens. They later became active members of Hauser Community Church, and enjoyed the fellowship there for many years. Willis was an avid bear hunter and won many trophies over the years. He and Lora moved to Gold Beach, Oregon sometime in the early 1980s where he enjoyed guiding bear hunts; Lora took joy in cooking for the various customers, who invariably became friends. They so appreciated fellowshipping at First Baptist Church of Gold Beach, where they developed many precious friendships. The greatest joy of Willis’ life was when he and Lora became grandparents to Dustin, Alice, Donnie, Jimmy, Katie, Stephanie and Andy. From the start, Grandpa Willis had no problem changing diapers or whatever was necessary in their care. He thoroughly enjoyed their birthday and holiday celebrations, taking them to camp, teaching them to drive, attending their sporting events and piano recitals, going on cross-country trips, stopping at 7-11 for a soda pop, or enjoying an occasional prime rib dinner. When Lora passed away suddenly in 1999, it was a great sorrow to Willis, but those seven grandchildren produced thirteen great grandchildren and they, along with the Lord, carried Willis through that difficult time. In 1988, Willis and Lora moved to Coquille, Oregon. Throughout the years since, Willis took great joy in his involvement at Arago Community Church. He enjoyed teaching home Bible studies and adult Sunday school classes. He was active in building their new facility, and pictures can be seen of him after hours, hosing down the newly poured cement foundation to keep it damp. He loved his church and he loved God’s people. One of the most memorable things about Willis was his infectious laugh. He laughed easily and heartily. He most always had a smile on his face. He possessed an incredible will to live, surviving two broken hips in his 90s. Willis entered into God’s presence early the morning of November 10, 2018 having attained the age of 99 years, 10 months and 22 days. Willis will be sadly missed, but fondly remembered by all those that knew and loved him. He leaves to cherish his memory, his two daughters: Vickie Baldwin and Cassie Webb; grandchildren: Dustin Hall, Alice Hall, Don Hall, Jim Hall, Katie Baldwin Munene, Stephanie Baldwin and Andy Baldwin; great-grandchildren: Charity, Courtney and Cutter Barklow, Dustin Jr. and Devin Hall, Dillon, Dane, Gavin and Rowin Hall, Mayson, Lance and Ruby Hall and Aliza Munene; three nephews: Allen and Ronnie Sutton and Bill Doolin; as well as two nieces: Nancy Quick and Mary Smith; as well as other relatives and friends. In addition to his parents and wife, Willis was preceded in death by three brothers: Claude, Homer and Robert; and four sisters: Pearl, Georgia, Jewell and Nancy. Graveside services were held at 2:00 p.m. Wednesday, November 28, 2018 in the Fairview Cemetery of Laquey, Missouri with Pastor John Baldwin officiating. Services were under the direction of Memorial Chapels and Crematory of Waynesville / St. Robert.

Willis Alvin Sutton, son of the late Alexander and Savilla Sutton, was born December 19, 1918 in Hanna, Missouri where he grew up and graduated from Richland High School with the Class of 1937. At a young age, Willis accepted the Lord... View Obituary & Service Information

The family of Willis A. Sutton created this Life Tributes page to make it easy to share your memories.