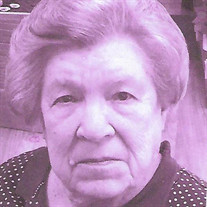 Winifred Mary Compton, daughter of the late Fredrick F. and Amy A. (Styles) Hahn, was born November 20, 1929 in Wales, North Dakota. She passed away Monday, November 12, 2018 in her home in Crocker, Missouri having attained the age of eighty-eight years. Winifred grew up in Minot, North Dakota and graduated from Minot Model High School in 1947. After graduation, she began working at a theater as a cashier and then met a United States soldier by the name of Reman Harold Compton. They were united in marriage on April 10, 1954 in Towner, North Dakota and were blessed with four children: David, Rickey, Brenda and Lori. Due to Reman being in the military, the family was transferred to Fort Leonard Wood. Winifred began working on base with Military Community Service and personnel coming in to help find housing. She later began working for United Telephone as a supervisor and retired in 1980. After her retirement, Winifred was able to do more of the things she enjoyed. She loved to read and working on puzzles of any kind. She loved her family and would always look forward to visits from the children and grandchildren. Winifred leaves to cherish her memory, her two sons, David Compton (Viola) of Ellicott City, MD and Rickey Compton (Gail) of Richland, MO; her daughter, Lori; seven grandchildren and five great-grandchildren; as well as a host of other relatives and friends. In addition to her parents, Winifred was preceded in death by her husband Reman Harold Compton; one daughter: Brenda Todd; one brother: Richard Hahn; and one sister: Mary. Graveside services were held at 3:30 p.m. Friday, November 16, 2018 in the Colley Hollow Cemetery of Buckhorn, Missouri with Pastor Lindsay Walters officiating. Services were under the direction of Memorial Chapels and Crematory of Waynesville / St. Robert. Memorial Contributions in memory of Winifred Compton may be left at the funeral home.

Winifred Mary Compton, daughter of the late Fredrick F. and Amy A. (Styles) Hahn, was born November 20, 1929 in Wales, North Dakota. She passed away Monday, November 12, 2018 in her home in Crocker, Missouri having attained the age of eighty-eight... View Obituary & Service Information

The family of Winifred Mary Compton created this Life Tributes page to make it easy to share your memories.