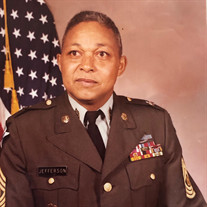 CSM (Ret) Winston O. “Jeff” Jefferson, one of eleven children born to the union of the late Will and Viola (Henderson) Jefferson, was born November 19, 1933 in Henderson, North Carolina where he grew up and graduated from Henderson Institute. Shortly after graduation, Jeff attended North Carolina A&T University before being drafted into the United States Army. Jeff served his country faithfully for 32 years until his retirement in 1983. He earned several awards and commendations, some of which include: Army Commendation Medal w/3 Oak Leaf Clusters, Silver Star, National Defense Service Medal w/Oak Leaf Cluster, Armed Forces Expeditionary Medal-Korea, Combat Infantry Badge, Bronze Star Medal, Overseas Service Ribbon (2), Good Conduct Medal (9th Award), Meritorious Service Medal w/1 Oak Leaf Cluster, Vietnam Service Medal w/2 Bronze Service Stars, Republic of Vietnam Campaign Medal, Vietnam Cross of Gallantry w/Palm, Vietnam Cross of Gallantry w/Bronze Star, Meritorious Service Medal w/2 Oak Leaf Clusters, Army of Occupation Medal (Germany), and the NCO Professional Development Ribbon (5). He served in Korea and Vietnam and had attained the rank of Command Sergeant Major. On February 4, 1956, Jeff was united in marriage to the love of his life, Else Ida. They shared over 38 years of marriage together and were blessed with three children: Kennith, Karalee and Monika. Else preceded Jeff in death on October 15, 1994. After retiring from the military, Jeff continued his education and graduated from Drury University with a Bachelor of Science Degree in Secondary Education. He loved serving his country, but he also loved serving his community as a substitute teacher for the Waynesville R-VI School District as well as being a consistent presence for the VFW, Lions Club and American Legion which he loved. Jeff was a lifetime member of the Francis J. Lynch VFW Post #3168 of Laquey, MO Fort Leonard Wood Lions Club and American Legion. His greatest joy was spending time with his family, especially his grandchildren. He loved attending their sporting events and seeing them achieve their goals. He also enjoyed being outdoors fishing and hunting with his wife and children and working in his “BIG” garden. Even though Jeff was a profoundly proud soldier, he was the most compassionate, humble and peaceful man you would ever meet. His smile was infectious and indicative of the person he was, he never met a stranger. He was loved deeply by his family and friends and will be sadly missed by all those who knew and loved him. Jeff passed away Friday, March 15, 2019, at the James L. West Center, in Fort Worth, TX having attained the age of 85 years. Jeff leaves to cherish his memory, his three children, Kennith Jefferson (Tracey) of Lantana, TX, Karalee Jefferson Barbee of Lantana, TX, Monika Jefferson of Harrisburg, OR, three grandchildren, Winston Bryce Jefferson, Avery Leigh Jefferson and Jodi M. Oberon-Jefferson; a number of nieces and nephews; as well as a host of other relatives and friends. In addition to his wife and parents, Jeff was preceded in death by all his brothers and sisters. Services were held at 2:00 p.m. Saturday, March 23, 2019 in the Memorial Chapels and Crematory of Waynesville / St. Robert with Chaplain (MAJ) Anthony Cech officiating. CSM (Ret) Vincent “Bobo” Jefferson recalled his wonderful memories of Jeff. The songs “Amazing Grace” by Gloria Franchi, “Let Me Live in the Light of His Love” by Charley Pride and “Oh Happy Day” by Mahalia Jackson were played. Serving as escorts were the United States Army. Burial with military honors followed in the Waynesville Memorial Park Cemetery of Waynesville. Military honors were provided by the United States Army of Fort Leonard Wood, Missouri.

CSM (Ret) Winston O. &#8220;Jeff&#8221; Jefferson, one of eleven children born to the union of the late Will and Viola (Henderson) Jefferson, was born November 19, 1933 in Henderson, North Carolina where he grew up and graduated from Henderson... View Obituary & Service Information

The family of CSM (Ret) Winston O. “Jeff” Jefferson created this Life Tributes page to make it easy to share your memories.