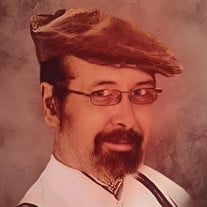 Woodford Alvin Avey was born at Ft. Collins, Colorado, to Alvin Thomas and Junie Mae (York) Avey on February 26, 1971, and after a brave, hard fought battle, “Woody” left the worries, and cares of this world behind at 3:50 p.m., the afternoon of Sunday, July 11, 2021, while in the Missouri Baptist Hospital, St. Louis, Missouri. At a young age he made a profession of faith. Woody spent his first four years of his life in Colorado and Wyoming before his family settled into Richland, Missouri, where he attended school. On August 27, 1994, Woody was married to Peggy Sue Rowden near Richland, MO. The couple, and their four children enjoyed the challenges of life together, as one big family. However, it seemed like there was always room for other kids to wiggle their way into the hearts, and lives of the Avey family…all were welcomed. He was known for being “the best” mechanic and was able to fix most anything. Anytime a friend, or a neighbor needed his help, they’d come looking for ole Woody; and was always willing to lend a helping hand. He was a truck driver for North American and National Carriers for approximately ten years, then in 2004, Woody began his career with Tri County Tire, and Towing, where he worked before getting sick. Woody did have his own wrecker, but you know what they say, “Sometimes the mechanic’s vehicle doesn’t receive the attention it needs!” Woody just loved spending time at the Lake with family, especially his grandchildren, fishing, and tubing with his boat. He owned several motorcycles and riding them was a passion, as well as, driving race cars. Woody was preceded in death by his grandparents, and loving parents. He leaves behind to cherish his memory, wife, Peggy of the home; children, Thomas Avey (Nancy), daughter, Jennifer Avey(Alex Rogers) all of Richland, MO; Loutina Hargett of Lebanon, MO, James Shaffner of Richland, MO; 8 grandchildren: Clayton, Lilly, Izzy, and Paisley Beasley, Daniel (Mikala) Hargett, Dakota Hargett, Roland, and Madason Shaffner; 6 great grandchildren; Summer Heath Hougardy of Lebanon, MO who was very special to Woody; and a host of other relatives, and friends. Woody had a big heart with enough love for everyone. He brought great joy and laughter into the lives of those he loved and to his many friends. The legacy Woody’s left behind will live on in the lives of those he touched and bring comfort until we see him again. Services were held at 1:00 p.m., Saturday, July 17, 2021, in the Memorial Chapel of Richland with Pastor Harold Elson officiating. Special music included “Even Though I’m Leaving,” June & Joey, “My Old Man,” Zac Brown, “Gone Too Soon,” Simple Man, “Jealous of the Angels,” Donny Taggart, “Drink A Beer,” Luke Bryant, and “Scars In Heaven,” Casting Crowns. Servings as escorts were Ross Reinhart, David Roberts, Shon Jacoby, Michael Beasley, Gail Rowden, and Johnny Smith. Honorary escorts included Ed Moore, Brad Moore, Marion Light, Glen Roe Sr., Patrick Anderson, and Michael Keith. Burial followed in the Lewis Cemetery near Richland, Missouri. Services were under the care and direction of Memorial Chapel of Richland. In lieu of flowers, the family have requested memorial contributions be made in memory of Woody Avey and can be left at the funeral home.

The family of Woodford "Woody" Alvin Avey created this Life Tributes page to make it easy to share your memories.