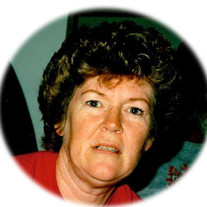 Zora Lea (Williams) Pease, daughter of the late Howard L. and Mary Emma (Crossland) Williams, was born December 10, 1941 in Elk Creek, Missouri. Shortly after her birth, Zora and the family moved to the Buckhorn, Missouri area. At the young age of 12, Zora accepted Christ as her Savior and was a member of the First Baptist Church of Buckhorn. She was currently a member of Faith Baptist Church of Waynesville. Zora attended school in Waynesville and graduated with the Class of 1960, which was the first class to graduate from the “new” high school at the time. On March 26, 1960, Zora was united in marriage to Norman Payne and they moved to Cincinnati, Ohio. They were blessed with one daughter who passed away three days after her birth, Norma Denise Payne. While living in Cincinnati, Zora worked for the Credit Bureau of Cincinnati and worked there for 31 years and obtained the title of Administrative Assistant, Executive Vice President and then retired on August 28, 1992. On February 14, 1986, Zora was united in marriage to William Joseph Pease and they shared 26 years together before he preceded her in death in 2012. In August of 1996, Zora and Bill moved back to the Buckhorn area to live on her parent’s home place. In her spare time, she enjoyed sewing, making quilts and crocheting. Zora went home to be with her Lord Friday, May 12, 2017 in her home having attained the age of 75 years, 5 months and 2 days after a courageous battle with cancer. She will be sadly missed, but fondly remembered by all those that knew and loved her. Zora leaves to cherish her memory, her stepson: William L. “Bill” Pease (Shelly) of Cincinnati, OH; stepdaughter: Carla Marie Mokas (Chris) of Burlington, KY; brother: Arthur Williams (Lucille) of Salem, MO; five step grandchildren; three step great grandchildren; several nieces, nephews, cousins, other relatives and friends, and special nephew: Greg Owens. In addition to her parents, husband Bill, and daughter Norma, Zora was preceded in death by two brothers: Gene Williams and Billy Crossland; two sisters: Marie Williams and Carolyn Prock; one brother-in-law: Don Prock; and one nephew: Donnie Prock. Services were held at 2:00 p.m. Monday, May 15, 2017 in the Memorial Chapels and Crematory of Waynesville / St. Robert with Pastor Danny Graves officiating. The songs “Where the Roses Never Fade” by Arthur Williams, “Angels Rock Me to Sleep” by Marty Stuart, and “One Day at a Time” by Cristy Lane were played. Serving as escorts were Rick Williams, Greg Owens, Adam Letterman, Bill Pease, Travis Owens and Chris Mokas. Serving as honorary escorts were Arthur Williams and Roger Fandel. Burial followed in the Buckhorn Baptist Cemetery of Waynesville, Missouri. Memorial contributions may be made in memory of Zora Pease and may be left at the funeral home.

Zora Lea (Williams) Pease, daughter of the late Howard L. and Mary Emma (Crossland) Williams, was born December 10, 1941 in Elk Creek, Missouri. Shortly after her birth, Zora and the family moved to the Buckhorn, Missouri area. At the... View Obituary & Service Information

The family of Zora Lea Pease created this Life Tributes page to make it easy to share your memories.